Share All sharing options for: Cubs Historic Photos: 21st In A Series

This one should be pretty easy -- but if you look at it for a while and still can't guess, find the answer after the jump. 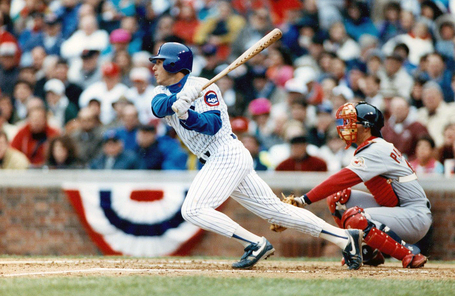 Obviously, it's Opening Day -- that's the only time the Cubs have played the Cardinals at Wrigley with bunting on the brick wall, and the opponent is clearly St. Louis. It has to be the late 1980's or early 1990's, because of the bear logo on the sleeve.

The Cardinals catcher is easily identifiable from the "P" on his shirt -- it's Tom Pagnozzi, who was their mostly-regular catcher for much of the 1990's.

The Cubs stopped wearing pants without belts after 1989 and went back to the belted look for the 1990 season, so this has to be 1990, 1991 or 1992. If you haven't guessed the Cub by now, it's Joe Girardi, who left the Cubs after 1992. The only Opening Day game that Girardi caught as a Cub, against the Cardinals, was on April 11, 1991. The Cubs lost the game 5-4; trailing 5-2 going into the last of the ninth, the Cubs scored twice and had the tying run in scoring position with only one out. George Bell, playing his first game as a Cub, struck out and Andre Dawson then hit an infield single to load the bases, putting the tying and winning runs in scoring position; unfortunately, Shawon Dunston flied to right to end the game.

Which AB is this for Girardi? In four plate appearances that day, he flied to right, grounded to third, grounded back to the pitcher and walked. In this photo he has clearly just hit the ball somewhere -- and I'd say it looks like he's looking toward right field, so this is probably his first AB, which ended the bottom of the second inning.