Share All sharing options for: Cubs Historic Photos: 22nd In A Series

At first glance, you might think there aren't enough clues in this photo to figure out when it was taken. Think about it again and you'll realize it's actually fairly simple. (And yes, unlike a couple of recent photos, this time I'm 100% certain.) 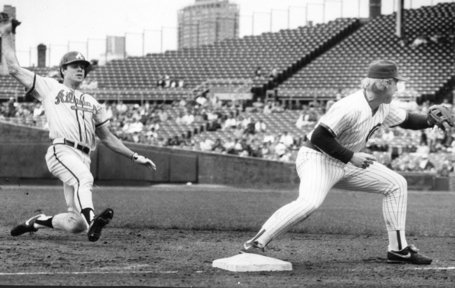 The key to figuring this one out is the identity of the third baseman. If you know your 1980's Cubs history (and this has to be the 1980's, given the Cubs uniform style and the Atlanta road uniform), you'll recognize Keith Moreland. Moreland played 195 games at 3B as a Cub, 150 of them in 1987 as the regular 3B. As a third baseman, Moreland was a much better outfielder, but he had to move from RF to 3B in '87 to make room for Andre Dawson.

So that makes 1987 the likely year of this photo -- and the proof of that is the Atlanta road uniform; Moreland was traded to the Padres after the 1987 season and 1987 was also the first year that the Braves wore those road uniforms after many years of wearing powder-blue road uni's.

If you followed baseball closely in the 80's, you'll recognize Dale Murphy as the sliding baserunner. The Braves played five games at Wrigley Field in 1987 -- the sixth scheduled one was postponed and not rescheduled. So which game was it?

So it has to be the one other date -- August 27, when the teams played a doubleheader in front of 19,006. There are several possibilities given the game logs for game one and game two -- Murphy was on base several times. But the only one that truly makes sense would be a play in the fourth inning of game one. Murphy was on second base and retired at 3B on an attempted sacrifice; that's the only reason Moreland would have been facing toward the plate on the play.

The teams split the doubleheader. After winning game two the Cubs were at .500 -- 63-63. In somewhat typical fashion for that era, they then collapsed and went 13-22 the rest of the way to finish last in Andre's MVP season.

Reminder: you can buy this and other historic Cubs and Chicago photos on eBay from seller "suntimesphotoarchive".