Share All sharing options for: Chicago Sports Historic Photos: The Bears At Wrigley

With the NFL playoffs gearing up this weekend, I thought I'd post another photo of the Bears at Wrigley Field; follow me after the jump to find out more about this one. 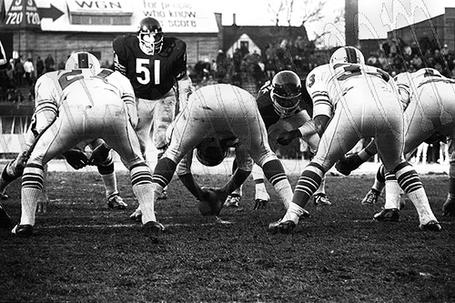 I'm sure you recognize NFL Hall of Famer Dick Butkus, #51; this photo appears to be him covering a fourth-down ball about to be snapped for a punt. The opposing team isn't clear from the photo, but from the information given me with the photo, this was taken on November 22, 1970, a 31-13 win over the Buffalo Bills. This was the first year of the merger; the Bills were one of only two original AFL teams (the Chargers were the other) who played in Wrigley Field.

Bobby Douglass, who later was a touchstone for angry Bears fans who either wanted a better QB or wanted Douglass to be converted to tight end or both, threw four TD passes in this game -- the only one he started in 1970. Another NFL Hall of Famer was a member of the Bills in 1970, but he didn't play in this game -- didn't play after November 8, so he must have been injured. Some guy named Simpson.

One other note on this photo, and one of the main reasons I posted it -- it has a very clear shot of the WGN radio & TV sign on the Waveland rooftop which now bears the Horseshoe Casino ad.