Share All sharing options for: Cubs Historic Photos: 14th In A Series

Of course, you know who this is -- Hall of Famer Bruce Sutter, who unfortunately went on to greater glory after he left the Cubs after the 1980 season.

Follow past the jump to find out more about this photo. 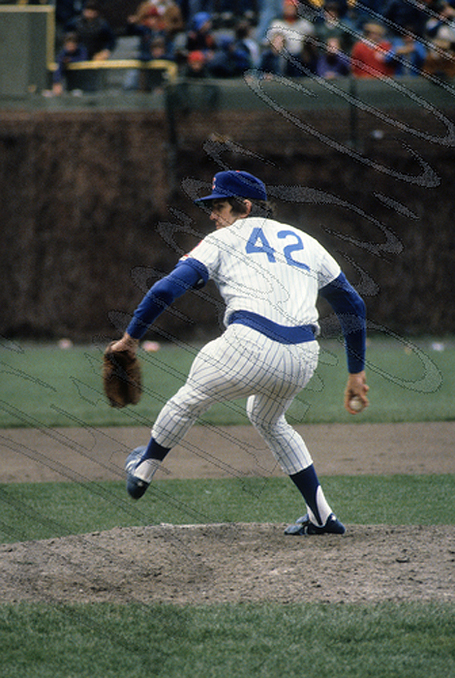 Unfortunately, there are no clues in this photo that would indicate the day's opponent. All you can figure from the photo itself was that it was taken early in the season -- likely April -- and that it was cold (long sleeves on Sutter and people wearing coats in the bleachers).

I was at the April 22 game -- that's a notable date in Chicago history, as the temperature reached 92 degrees. That still stands as the hottest day in the month of April in Chicago history. So the photo couldn't have been taken that day. The April 17 and April 19 boxscores have no weather conditions listed. I was at both of those games, too; April 17 was the home opener and April 19 was a Saturday -- I didn't write the weather conditions on my scorecards and, 30 years later, I have no recollection of what the weather was like those days.

My best guess is that this photo is from the April 25 game vs. the Pirates; the boxscore says it was 40 degrees that day with a wind blowing in from RF at 12 MPH. Sutter threw two innings that day, allowed one run, and posted his fifth save. The Cubs had won seven games and at 7-4, were in first place. The rest of the season was all downhill -- the 1980 Cubs lost 96 98 games and Sutter was traded away at the end of the season.