Book Review: 'When The Game Changed'

Share All sharing options for: Book Review: 'When The Game Changed' 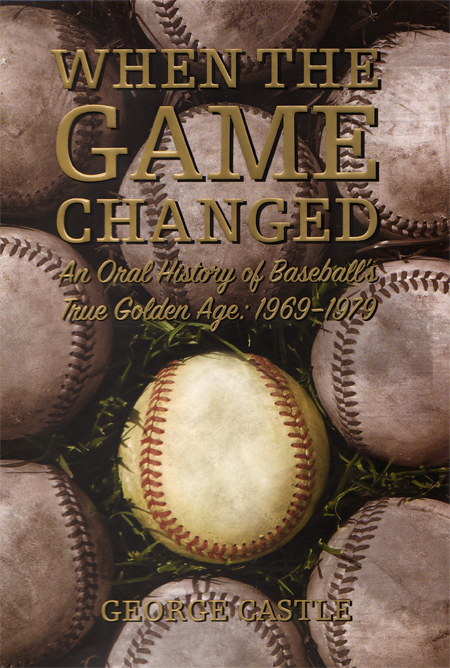 George Castle has written a number of books about the Cubs and baseball history and is currently a contributing columnist for our sister site SB Nation Chicago, among other media sites.

But before all that, he was part of a right-field bleacher group that I joined in 1979, the same group that still exists in the left field corner in section 301.

"When The Game Changed" is a history of baseball covering the years 1969-1979. This would be unremarkable -- it's just a choice of a ten-year period of baseball history, though an eventful one -- except for the author's choice of the format used to write this book.

The subtitle of the book is "An Oral History of Baseball's True Golden Age, 1969-79", and that is its genius and what makes for a compelling narrative. The story of what Castle calls "Baseball's True Golden Age" is told in large part by those who played the game during that era. Castle has interviewed dozens of former major leaguers who played during the 1970s and this history is told in their own words.

It's arranged by themes -- there are not only stories told of the champion Pirates, Reds and Athletics of that era, but of "would-be dynasties" and "collapses, near-misses and wannabes". As a Cubs fan who was 12 during the 1969 collapse, of course I already know the story of that team. But there were several other teams that could have been where the Pirates, Reds and A's were, including a very good Red Sox team that made only one World Series (1975) but could have won three or four more division titles with just a little bit of luck or a little more talent here and there, and the Orioles, the winningest team of the 1970s, but who only managed one World Series win.

You'll also read about dominant pitchers like Fergie Jenkins and Bob Gibson, even in an era when owners, worried about the decline of hitting in the "Year of the Pitcher" (1968), had tinkered with rules (lowering the mound, adding the DH) in order to create more offense. There's a long section about Tommy John and the now-common surgery named after him, describing in his own words how that surgery came about.

More topics covered in this entertaining book about this eventful decade include labor relations, the strike and free agency; race relations and how racial attitudes were changing in baseball, mirroring society; and some funny stories about "characters" in the game, including Mark "The Bird" Fidrych, Billy Martin, Ted Turner and ... Lou Piniella.

And there are also some personal reminiscences from Castle that resonated with me, because I experienced many of the same things coming of age as a baseball and Cubs fan in that era. If you grew up then, you'll recognize yourself in many of those stories. If you're too young to know the 1970s, it's an era that -- until this book -- hasn't been well-chronicled in such a detailed way, and never in the form of an oral history, the first-person accounts of those who lived it. This is a fun book that is well worth your off-season time.

Full disclosure: I received a review copy of this book.