Yesterday at SB Nation Chicago, I chronicled MLB Advanced Media's shutdown of Cubscast, a six-year-old podcast about the Cubs that had produced over 650 episodes. Lou, Sheps and Sneetch, the podcast-names of the good guys who did all these podcasts, had booths at a couple of Cubs Conventions -- so the Cubs can't claim no knowledge that they were doing this. (If you haven't seen the details yet at SB Nation Chicago, please check out yesterday's article linked above.)

And the heavy-handedness of MLBAM's lawyers -- they even objected to Cubscast's use of Cubs team colors on their website, as if MLB could trademark or copyright the colors red and blue -- is one more piece of evidence that MLB has not exited the dark media ages when there were only three TV channels in most cities, a handful of radio stations, and a "computer" was something that had big whirring fans and took up a room the size of a two-bedroom apartment.

The reason this attitude is important to the future of major league baseball is that by cutting off things like Cubscast -- which gave the Cubs and MLB free publicity for six years and didn't cost them a penny -- MLB is risking cutting off the young generation of fans it claims to want to engage. Look at the poll on the sidebar of this site (and vote in it if you haven't already). About half the readers of this site are 34 and under, and 17% are 24 and under. This is the generation that uses smartphones and the internet to access baseball and embraces new technology. Here are MLBAM's rules for watching its product online:

And if you think those rules are ridiculous (and they are), there are even more arcane and silly rules here.

On what planet do those rules make any sense? If I have my computer somewhere and I want to watch a Cubs telecast when I'm not at home, what difference should it make if I'm in Chicago, or in New York, or in Arizona, or on some isolated mountain in Tibet? As long as I have an internet connection, I should be able to watch the game. Technology exists that could provide me the same commercials that I would watch if I were at home and watching the game on WGN, WCIU or CSN Chicago.

Since I'm generally at home games and usually at home during most road trips, I can watch the games on my television, but I'm the exception. There are many Cubs fans who would love to watch, for example, Cubs day games while they're at work -- but they can't, unless they live in California or Florida or Texas or Europe. Downtown Chicago? Out of luck. Schaumburg? Sorry, pal, you're in our "territory". Naperville? Horrors, you're too close to Wrigley Field. You probably should have gone there, even though from some parts of Naperville it can take 90 minutes to get home from Wrigley in rush hour. No way, says MLBAM, are we going to allow you to watch the game on your computer or your iPhone.

This isn't even addressing the ridiculous territorial blackout rules which make it impossible for Cubs fans in many parts of Iowa -- where the Cubs have had a Triple-A affiliate for almost 30 years -- to watch games on cable or satellite. Guess those people just have to go to the ballpark, too, even though they live five or six hours drive away. I've posted the MLB territorial map before, but it bears repeating here. Check out the places where multiple teams have carved out "territories" based on arcane 1970s-era broadcast television coverage, coverage that no longer even exists: 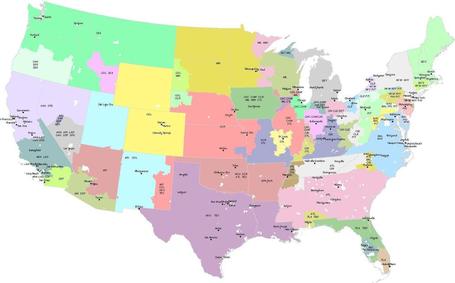 So now, essentially, MLB says to people who want to use modern technology to view and discuss the game:

Beyond this, unlike all the other professional sports leagues, MLBAM makes it impossible to embed video highlights of its games on other websites like this one. Sure, I can link to it and you can watch it on their sites -- but embedding it would give them the same exposure. What other business that you can think of tries every way possible to prevent its customers from consuming its product? My position has been simple and consistent: if you are willing to pay to watch a game, you should be able to, using any device you have, whether you live one block or ten thousand miles from the team's home.

I understand MLB is trying to protect its trademarks and copyrights. That's just good business sense; any business should do that. But its heavyhanded crackdown on Cubscast tells me that's their prime directive -- protect at all costs; make it difficult to get the product; turn off an entire generation of fans.

Because that's what they're doing. MLB has a very bad reputation for doing fan-unfriendly things via both old media (television) and new media (internet). MLBAM's policies are excluding, not including. And if they keep it up, the young sports fans they profess to want to attract will simply go elsewhere.