I love Wrigley Field and I'm not ashamed to admit it. I think everyone here knows that, and also should know that although I do love the ballpark, that's not my primary focus as a Cubs fan... it's winning the World Series, just as everyone else's here is.

But when the Cubs, Northwestern, Illinois and the Big Ten put on a spectacle as entertaining as today's 48-27 blowout by the Illini over the Wildcats, it shows off Wrigley to a national audience as the terrific place it is -- notwithstanding the rule changes forced yesterday by the Big Ten because the field was squeezed into an almost-too-small space.

For those of you who cried, "travesty", "joke" or "disaster" yesterday when the rule changes were announced, I say: kwitcherbitchin. Playing every offensive series facing the west end zone had absolutely no impact on the flow of the game. The officials seemed briefly confused the very first time they had to reposition the ball, but after that it all went smoothly. The east end zone actually did come into play when NU's Brian Peters returned an interception that way 59 yards for a touchdown. No players, brick walls or thick pads were harmed in the making of that score.

There was plenty of action at that end of the field, too -- most of it from the Illini's Mikel Leshoure, who set a school record with 330 yards rushing, which is also a Wrigley Field all-time record that is now likely never to be broken. Northwestern figured to struggle a little with redshirt freshman QB Evan Watkins replacing the injured Dan Persa, who walked on crutches to midfield for the coin toss. Watkins was shaky at first but played all right overall -- it's just that the Wildcats forgot how to play defense, allowing the most points they'd given up all year.

Figure this out. NU upsets 13th-ranked Iowa last week while Illinois is losing at home to a 1-9 Minnesota team... and then the Illini just blast Northwestern. It was entertaining and an enjoyable, fun game to watch, even if the result wasn't what I would have wanted as a Wildcat fan.

The spectacle was the real reason for the enjoyable day. Everyone wanted to create a bowl-game, party atmosphere and they succeeded, closing off Sheffield for food and drink and the Northwestern band, cheerleaders and dancers performing at the corner of Waveland and Sheffield.

Inside, the Blackhawks' Jim Cornelison did his usual stirring rendition of the National Anthem, but when the "seventh-inning stretch" -- oddly, done at the end of the first quarter instead of the more logical third -- was botched, fans dressed in both orange and purple booed. The crowd of 41,058 -- about 1,500 above the "official" listed capacity of 39,600 for the game -- was about two-thirds purple, though there was a large pocket of orange in the left-field corner, part of which was the Illini band, the rest apparently a large Illinois student section. By game's end, most of the purple-clad had departed early, leaving the Illinois fans to yell, "I-L-L", "I-N-I" with each other in victory.

And that's the point. Wrigley Field has nearly 100 years of history and has hosted many non-baseball events, more in recent years as the Cubs look for other sources of revenue. To those who say it doesn't matter if we keep it because the Cubs have never won a World Series, I say this.

The Cubs have won six National League pennants there -- and those do matter -- and played in six postseasons in the divisional play era. Should it have been more? Yes, of course. But you cannot deny that history, nor the history made there by great players dating back to Babe Ruth. Americans are too quick to tear down historic buildings for no particular reason. Wrigley Field is part of our national culture and heritage. Does it need renovation and modernizing? Yes, it does, and there is a reasonable argument to be made against asking for public funding for that in these economic times. I understand that and the timing of last week's request by the Ricketts family for such funding was questionable at best.

But tear it down? No. Fix it up, and when the Cubs win the World Series there -- and they will -- it will be that much sweeter, to add that kind of history to its nearly century of stories. I have now attended sports events in Wrigley Field in every calendar month except December and February, but the one I really want -- we all really want -- will happen soon, some October.

Here's what the scoreboard looked like at halftime of today's game: 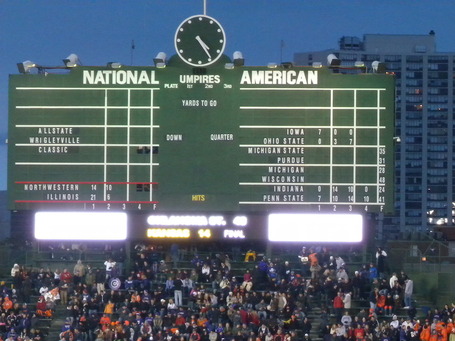 Click on photo to open a larger version in a new browser window. Photo by Al Yellon