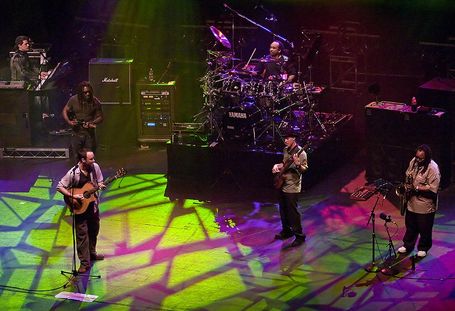 via upload.wikimedia.org; photo by David Iliff

The Dave Matthews Band -- whose bus driver notoriously unloaded 800 pounds of human waste on a tour boat passing under the Kinzie Street bridge in 2004 -- is expected to headline Friday and Saturday night concerts in September. The dates haven't been finalized. Matthews played Wrigley in 2007.

UPDATE: Sources say no deals have yet been signed for any bands nor any specific dates for concerts at Wrigley this summer. See this comment below for further updated information, including dates.

Well. First, this means no Paul McCartney show at Wrigley, as rumored last month. The most likely dates for the DMB shows would have to be 9/10 and 9/11 -- the Cubs are on a long road trip then and don't return until 9/21, so that would give them 10 days to get the field back in shape.

Spielman's article says Ald. Tom Tunney is going to introduce an ordinance today in the City Council to provide an "exception" to the current Wrigley ordinance to allow the DMB shows. He'll have to -- the current ordinance doesn't permit night events at Wrigley on Fridays and Saturdays.