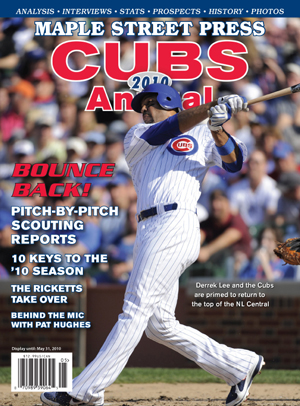 A number of you have asked about the 2010 Maple Street Press Cubs Annual, where I serve as editor. As of today it's available for preorders; go to this maplestreetpress.com page and get yours today. They will ship on February 17 (a week from today); if you live in the Chicago area it will be in bookstores and on magazine stands on March 2 (I believe it will also be available, as it has in the past, at some bookstores in the Phoenix area and also at the HoHoKam Park gift shop).

At the link above you can see a full table of contents; some of the highlights are an article by Pat Hughes describing how he does his job; a feature from the Daily Herald's Bruce Miles on the keys to a successful 2010 season for the Cubs; two stat-oriented articles from BCB's statistical analysis editor Shawn Domagal-Goldman, and several other articles written by BCB readers. And, as always -- no advertising, just 128 pages of analysis, stats (the stat pages, as they did last year, have plenty of detail) and photos.

Thanks also to everyone here for participating in the poll I posted a couple of months ago asking who you'd like to see on the cover. Derrek Lee got the most votes (37% of the 147 votes cast), so he got the cover photo. For those who said Tom Ricketts should be on the cover, yes, he's a big story, but I figured selling a baseball annual wouldn't go too well with a cover photo of a guy in a business suit. There will be plenty of information and analysis of the Ricketts purchase of the team inside the annual.

Thanks for supporting the MSP Cubs annual in the past and I hope you'll order your copy of the 2010 edition soon! I'll also be putting a link on the right sidebar so you'll be able to order conveniently after this post moves off the front page.