Share All sharing options for: Oh, No! Can Ron Santo Really Be 70? 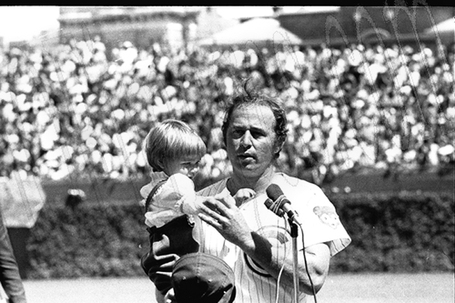 Ron Santo with one of his sons, on Ron Santo Day at Wrigley Field, August 28, 1971 (photo courtesy Leo Bauby)

There will be another community projections post later this morning, but I wanted to start today by wishing a happy 70th birthday to Cubs broadcaster Ron Santo.

I've written many times that I don't particularly care for Santo's broadcasting style -- I'd much rather hear a more accurate baseball analyst with Pat Hughes. But there is absolutely no question that Santo, for lack of a better term, "bleeds Cubbie blue" like all the rest of us. He's a fan, and I'll bet if he were a BCB member he'd be one of the ledge-jumpers when the Cubs were doing poorly, and cheering the loudest on a long winning streak. There is no question of his love for the team and his love for the game.

If you haven't before, today would be a good day to read my top 100 Cubs profile of Santo, posted three years ago. I admire Santo's courage trying to face his life with juvenile diabetes. While there are quite a number of professional athletes today playing with that disease -- including the Cubs' Sam Fuld -- Santo was the first high-profile athlete to have a long career while trying to live with juvenile diabetes, in a time when people didn't have the medical technology they do today. I believe Santo's performance on the field qualifies him for the Hall of Fame; to consider that he did it while fighting this disease makes 14 years in the major leagues that much more remarkable. Most people who have juvenile diabetes don't make it past age 65 -- to have reached 70 is a tribute to his determination, and likely as well, to his years as a professional athlete.

Santo has also had many health problems since he left baseball, including the loss of both his legs. But as seen in the film "This Old Cub" (and if you haven't seen it, you should), he has taken all of this with unfailing good humor. When he was unable to be in the broadcast booth during the 2003 NLCS, Cubs players hung his jersey in the dugout in his honor.

Happy birthday, Ron Santo. May you have many more, and may the Cubs give you the ultimate birthday present this year -- a World Series title.