Share All sharing options for: Cubs Historic Photo: 23rd In A Series

Once again, you may not think there are enough clues to figure out when this was taken. Your hint: the uniforms of all three principals in this photo are a clue, as well as the crowd. 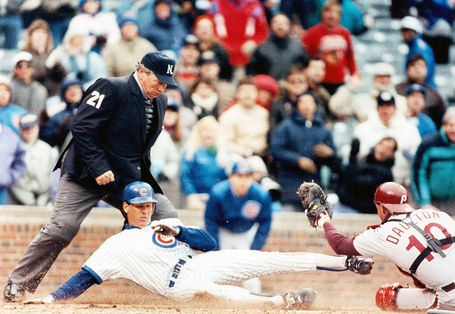 It's obviously a cold day -- look at the coats on the fans in the seats. So it's likely an early-April game.

But the clue that gives it away is the identity of the umpire. That's Harry Wendelstedt, who was an NL umpire from 1966-1998. There is only one Phillies/Cubs game in 1990 or 1991 where Wendelstedt was the plate umpire. That was Opening Day, April 10, 1990. (If you're wondering why only 7,791 showed up at Opening Day for a defending division champion, the scheduled opener on April 9 had been rained out -- this was a hastily rescheduled makeup game on an off day, and before 1993 the NL announced only turnstile count, not tickets sold.)

The play in question is in the bottom of the eighth. With Mark Grace on first and Ryne Sandberg on second with one out in a 1-1 tie, Luis Salazar singled. Sandberg tried to score and was thrown out -- that's what you see here. Grace took third on the play. The next hitter, Marvell Wynne, singled him in with the eventual winning run in a 2-1 Cubs win.

That was about as good as it got in 1990. The Cubs fell under .500 at 6-7 and never had a winning record that year after that. They finished 77-85, fourth in the NL East, but Sandberg had arguably his best year, hitting 40 homers to lead the NL and driving in 100 runs, posting a .913 OPS (best of his career, and fourth in the league). He finished fourth in MVP voting.