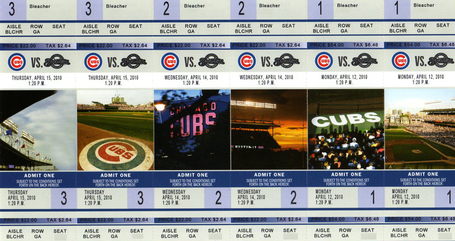 Because I will be leaving for Arizona this weekend, I made arrangements with the Cubs ticket office to pick up my tickets ahead of the big FedEx shipment they are sending out this week (for those of you who are season ticket holders, you should have received an email with a FedEx tracking number, or will get such an email within the next couple of days, letting you know when they'll be delivered).

As you can see above, the tickets look pretty much the same as they did last year, with different photos. Also as last year, my two tickets came in one book, with the tickets for each game back-to-back as shown. Just thought all of you would like to see them. Click on the photo to open a larger version in a new browser window. (And yes, I took off all my personally identifiable info and the barcodes.)

Since a considerable amount of angst was spilled over the Xavier Nady "can't play the outfield regularly" report yesterday, before I recap today's 8-7 Cubs win over the Padres, here's the straight story from Carrie Muskat's blog:

Nady will be able to play outfield on Opening Day but is not expected to be able to throw at full speed until June 1. There's been no talk about having Nady open the year on the disabled list.

"My understanding from talking to the trainer and our medical people is he can play a couple days a week early in the season and hopefully by the first of June, if need be, we can put him out there on a more consistent basis than that," Piniella said. "We'll have to wait and see. I don't see the DL scenario at all. We haven't even discussed that."

So seriously, where's the issue here? Nady's supposed to be a platoon right fielder as it is. If he can play two days a week substituting for Kosuke Fukudome (and likely be replaced defensively by Sam Fuld in the 8th or 9th inning), where's the big problem? I don't see it, and the attacks on Jim Hendry for this signing were, IMO, uncalled for. It's my belief that Hendry wouldn't have signed Nady if his medical reports didn't check out.

Also before the game recap, let me say that I thought ex-WGN announcer Andy Masur did a nice job on the PBP of today's game -- makes you understand how truly awful Judd Sirott is and how the Cubs miss him as the replacement for Pat Hughes.

Now, about Carlos Silva. He managed to throw three scoreless innings, but got hit pretty hard doing so. He allowed two doubles and two singles, issued a walk, struck out no one, and about half of his outs were outfield fly balls or line drives, against a Padres lineup with a handful of regulars. Does this one start mean he'll be any good? No, not any more than the last start meant he should be summarily DFA'd. Let's see what happens in his next outing. (Thanks to BCB'er mikegncb34 for the headline idea!)

Starlin Castro, who got the start at SS in this all-substitute team, was the hitting star today, scoring three runs and hitting his first homer of the spring. Sam Fuld doubled and made a nice leaping grab of a Scott Hairston drive against the CF wall in Peoria. The rest of the pitching staff did well, allowing the Padres only one hit, a couple of walks, and an unearned run, until Jeff Stevens got hit in the 8th and Lou had to yank him. Esmailin Caridad put out that fire, but then let the Padres make it close in the 9th. That's not good, although, to be fair, all of the six runs San Diego scored in those last two innings were unearned, due to several errors by kids who will spend most of the year at the lower minor league levels.

From the Muskat blog link above, here's the pitching (and managing) lineup for this weekend's split-squad games (half the team is headed to Las Vegas to play the White Sox):

Alan Trammell will manage the Cubs in Las Vegas. Lou Piniella is staying back with the other half of the team in Arizona for games Friday against Milwaukee and Saturday against Cincinnati. Jeff Samardzija will face the Brewers while Tom Gorzelanny will start Friday in Vegas against the White Sox. Ryan Dempster makes his second start Saturday in Vegas while Sean Marshall faces the Reds. Piniella said he hopes the team can make some definite plans with the pitching by March 21-22.

That's a good opportunity to get all the candidates for the rotation some innings. I'll be posting multiple game threads tomorrow, when there will be a day game vs. the Brewers at Maryvale and a night game vs. the White Sox in Las Vegas. On Saturday, the games will be at 2:05 (vs. Reds at Mesa) and 3:05 CST (vs. Sox), so just the regular afternoon set of threads then.