While It Snows At Wrigley, Cubs Split Pair In Arizona

Share All sharing options for: While It Snows At Wrigley, Cubs Split Pair In Arizona 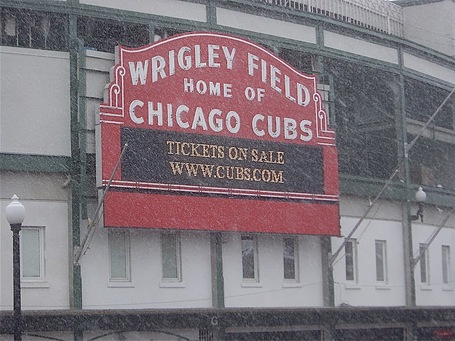 MESA, Arizona -- Seriously, I feel for all of you suffering through the early-spring snowfall in Chicago today -- pictured above. Yes, really, even while I'm enjoying the sunshine and warmth in Arizona.

(You believe me, right? Right?)

Anyway, before 11,642 in Mesa (raising the spring average to 10,808), the Cubs beat the Royals 4-0 behind the eight-hit pitching of four Cub hurlers. One of those who threw today, Casey Coleman, had already been reassigned to minor league camp, but his two shutout innings this afternoon bode well for the future.

Best of all, Carlos Zambrano had his longest and most solid outing of the spring, throwing five shutout innings, allowing only three hits and a pair of walks. Only seven balls -- the three hits and four outfield putouts -- left the infield, and Billy Butler's line-drive double down the right-field line was misplayed by Brad Snyder, otherwise Z might have gotten out of it with only a pair of dinky singles allowed.

Z also came up in the second inning with the bases loaded and we figured he was about to try to hit the ball into the Grand Canyon. He had a pretty good at-bat, running the count full and fouling off a couple of pitches before being called out on strikes on a knee-bending curveball. Ryan Theriot then cleared the bases with a double. Geovany Soto had earlier singled in the Cubs' first run.

Esmailin Caridad and Carlos Marmol finished up -- throwing for the first time this year in what will likely be their roles during the season, the eighth and ninth innings; Marmol hit a batter (shades of last year!) with two out, but otherwise threw well, striking out the side.

The Cubs emptied their minor league benches for this game, since two squads were required; among the players who got a chance for some major league time were D.J. Lemahieu, last year's 2nd round pick, and Michael Brenly, son of broadcaster Bob Brenly (he flied to center batting for Caridad).

Meanwhile, in Phoenix, the other half of the Cubs lost to the Athletics 7-4, scoring three runs in the ninth to make what was otherwise a blowout look respectable. The crowd of 7,947 was the A's third-largest home crowd of the spring and presumably included a number of Cubs fans (perhaps explaining the less-than-sellout at Mesa on a gorgeous Saturday).

Tom Gorzelanny walked five in less than four innings. This isn't good and Gorz will have to throw more strikes to nail down the last spot in the rotation. He allowed a pair of runs, both unearned. The rest of Oakland's runs were scored off guys who aren't going to make the team (Jay Jackson and Mitch Atkins); ex-Cub farmhand Jerry Blevins threw two shutout innings after Ben Sheets had given the sub Cubs only one run in four reasonably solid innings of work. By the time those three runs scored off 23-year-old Henry Rodriguez (no relation to the former Cubs outfielder), not a single player with major league experience was in the lineup except Micah Hoffpauir; he did double and score one of the three runs.

After the game, the Cubs definitively answered one of the questions raised here often by reassigning Starlin Castro to the minor league camp. Also reassigned was Brad Snyder, reducing the spring roster to 40. This is the right decision; Castro has tremendous talent, but isn't ready for the major leagues if he has to sit on the bench -- he needs to play every day at Iowa. I'd expect him to stay there until September.

Carlos Silva will go tomorrow vs. Justin Lehr, who made the Cubs look silly last August 4 in Cincinnati in only his second major league start. It will be the Cubs' first-ever visit to Goodyear to play the Reds (they have played the Indians there before, though), and the game will feature a Cincinnati split squad.