Share All sharing options for: Cubs Go Nowhere In 1-1 Tie With Reds 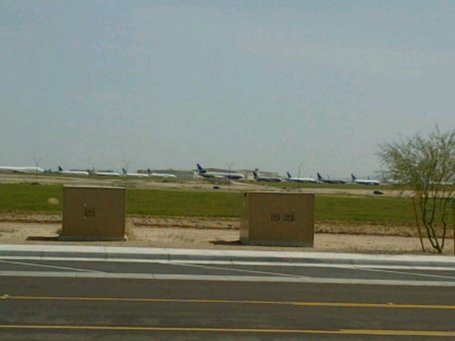 GOODYEAR, Arizona -- See the planes in the photo above? They're parked in what's known as the Goodyear Airport Boneyard, one of several places in the deserts of the Southwest where airlines store their unused airplanes. The dry desert climate helps them last longer.

Up until a few years ago, the boneyard at Goodyear was far from civilization. Now, it sits just behind the right-field wall at Goodyear Ballpark, spring home of the Reds and Indians, where I took the photo before this afternoon's 1-1 Cubs tie with the Reds, the first tie game of the spring. With rule changes creating suspended games in most situations during the regular season when you could have in the past wound up with a tie, the only time you can see a tie game is in spring training. Generally, it's agreed between the two managers when to call it a day; normally, it's when they run out of pitchers, although the Reds had someone warming up in the 10th, and Mike Parisi was standing rather forlornly by himself in the Cubs bullpen as the Reds batted in the bottom of that inning -- against Alex Maestri, who wasn't even a non-roster invitee to spring camp this year.

Such was this afternoon's languidly played game, which featured a Laynce Nix home run off Carlos Silva in the second inning -- after which Carlos said he had a strained quad and departed after having thrown well in the first inning, not so much in the second. Silva went and threw quite a number of pitches in the bullpen, then had a long discussion with Lester Strode before trudging across the field between innings toward the dugout with a member of the training staff.

The Cubs tied the game in the fourth when Tyler Colvin smacked a double to deep center and scored two outs later on a single by Micah Hoffpaiur. The Hoff had one of his better games of the spring, going 3-for-4; but his spring average is still only .235 and I suspect he's a longshot for making the team. Most of the "regulars" (only Mike Fontenot and Hoffpauir really qualified among today's starters) left the game in the late innings. Impressive in the field was Hak-Ju Lee, who took over for Fontenot at SS -- Lee has terrific range, but obviously needs quite a bit more minor league time as he has played only one professional season and won't turn 20 until November. Fontenot, for his part, played a competent SS and may have solidified his role as backup to both 2B and SS today.

Following the fourth inning, the teams combined for four doubles and a single and despite each team having RISP in the late innings, no one really came close to scoring, and the 7,252 in attendance (the Reds' second-largest home crowd of the year, about 60/40 Cubs fans) were sent home without witnessing a decision.

After the jump, my impressions of Goodyear Ballpark.

Goodyear Ballpark is a nice little park, reminiscent in some ways of the Brewers' park in Maryvale -- about 7,000 or so permanent seats and a berm area. The berm is one of the problems -- there's not very much room there and much of it has views obstructed by a fence above the wall and bullpens (the outfield walls are also pretty high, about 18-20 feet all the way around). As I noted above, there were 7,252 in attendance; there were a couple thousand empty seats down the foul lines, but the berms were pretty full. I had a berm ticket, but discovered some picnic tables near the LF foul pole, where I sat for the entire game with a reasonably clear view of the infield and about 90% of the outfield (partly obscured by a railing, and also by people who stood in front, but moved when asked politely). That's where I ran into BCB reader tharr, who I had given my cell number. He called and I told him where I was -- he said that's where he was. Turned out he was standing right behind me, which gave gales of laughter to his two friends. Nice to meet you!

The team store is about the best-equipped of any souvenir store in the Cactus League, and has plenty of merchandise for both the Indians and Reds. Note again to Cubs management: I don't know who's setting prices at HoHoKam Park, whether it's the Cubs or the HoHoKams, but souvenir prices there are essentially a giant ripoff. There's one particular spring cap that's on sale in Mesa for $31. The identical cap with an Indians logo at Goodyear is $22. That's just plain bad business, in my opinion, especially in a recession.

Food choices were pretty good, though a bit higher-priced than some other parks. I had been told that you could get Skyline chili, a Cincinnati favorite, there -- after searching around and settling for Philly cheesesteak, I finally found the one place they were selling the chili -- as a topping for a $4 hot dog at a portable stand. Looked OK, but not really a great presentation for a supposed signature food item. It didn't stop people from holding up their hot dog and chili while others were taking their photo. Strange, but to each his or her own, I guess.

Traffic and parking are easy -- there are three separate entrances and exits and traffic flow was good going both in and out, although that's partly due to the smaller size of the crowd and the fact that they had "Kids Run The Bases" after the game, which kept some families with small kids there. I'd definitely go back to this park, and recommend a visit there. From Scottsdale it took 45 minutes; it would probably take about the same time from the center of Mesa, presuming no traffic. Consider this: that's about a 40-45 mile jaunt, which will be about the longest in the Cactus League once the Diamondbacks and Rockies move to their new complex next year.

That would be equivalent to the closest spring park to Naples, Florida -- and that's only two teams, the Red Sox and Twins. All the rest of the Florida teams are at least a three-hour ride from Naples. That's one of the main reasons to stay in Mesa, among others. Back to Mesa tomorrow; Jeff Samardzija will start for the Cubs against Cleveland's Fausto Carmona.