Now What? Gorzelanny Shines In 7-2 Cubs Win, And Report From Fitch Park

Share All sharing options for: Now What? Gorzelanny Shines In 7-2 Cubs Win, And Report From Fitch Park 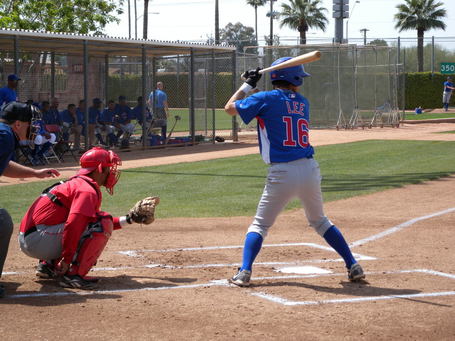 MESA, Arizona -- While Tom Gorzelanny was throwing six solid innings in the Cubs' 7-2 win over the Diamondbacks in Tucson, I spent much of the afternoon at Fitch Park in Mesa watching various Cubs minor leaguers.

Thus, I did not hear any of today's radio broadcast and didn't follow it much, except to see the two run-scoring rallies through MLB AtBat on my phone. Mike Fontenot, Tyler Colvin and Jim Adduci all had multi-hit games. But the real story was Gorzelanny, who allowed a homer to the first batter he faced (Conor Jackson) and an RBI sac fly to the third-to-last batter he faced (Mark Reynolds) -- and that was just about it. Gorz gave up only five hits -- although four of them were for extra bases -- and, more importantly, only issued one walk in the six innings he pitched. John Grabow threw two scoreless innings (that's good news) and James Russell finished up with another shutout frame -- Russell has now thrown nine innings this spring without giving up a run.

So now what? Does that seal the deal for Gorz? Or is Sean Marshall still in the running? I like what I've seen from Russell for the pen, but all of us know how misleading spring stats are -- especially for a guy (Russell) who's generally thrown late in games when he's facing mostly minor leaguers.

The brass will make decisions soon, possibly by tomorrow. More on my day at Fitch after the jump.

I was hoping to see even one major league player getting some extra work in while only about half of the regulars were in Tucson, but Lou must have given everyone the day off. I did spot Jody Davis, who was in charge of what appeared to be an intrasquad game on one of the fields. I did not recognize any of the names on the jerseys -- those guys were likely recent signees who will stay in Mesa for extended spring training and play at Boise this year.

Two other teams of Cubs took on some Angels minor leaguers on the other fields. Jim Hendry was around, but had his cellphone glued to his ear most of the time; the rest of the day, he was on the "guard tower" from which management can see all the fields. I didn't see Greg Maddux or anyone else from management.

Hak-Ju Lee, pictured at the top of this post, played shortstop and looked smooth and fluid in the field, though he didn't do much at the plate. Neither did most of the players for either team in the game I watched -- by the time I left, I don't think anyone had scored.

Jeffry Antigua, a hard-throwing lefthander from the Dominican Republic who won't turn 20 until June (see photos below), threw in the game in which Lee played. Throws hard, but needs to work on his command. From what I could tell, he definitely has promise for three or four years from now; he'll be a starter at Peoria this year, though his future could be in the bullpen. I believe Lee is also ticketed for Peoria, though if any of BCB's minor league experts can chime in with something they know different, please do.

Nice scene seen: the father and two sisters of one of the Angels' minor leaguers showed up with two cameras (still and video) to record his hitting (he was the DH), and to take family photos afterward. One more reminder that this game is about people.

Back to the major league field at Mesa tomorrow as Carlos Zambrano faces the Athletics. Tomorrow's game is on WGN radio and TV, and will also be on the MLB Network live at 3 pm CDT. 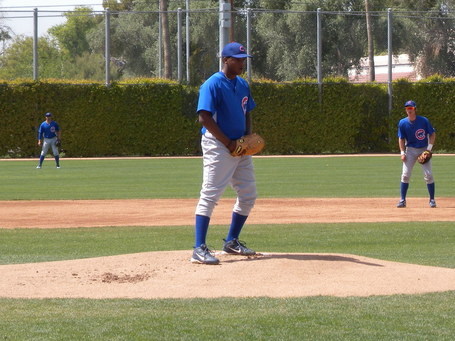 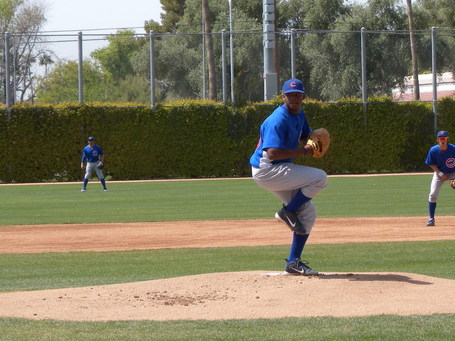