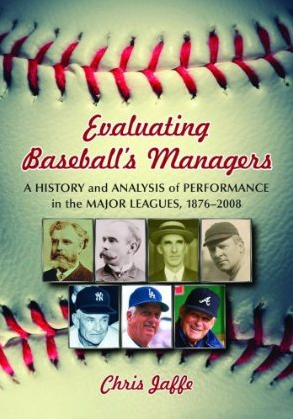 I have been remiss in posting reviews of several books I've read over the last couple of months, what with spring training going on a daily basis and now, the season beginning.

With today's off day, there's an opportunity for me to post some reviews of baseball books I've enjoyed. I'll be doing these for the rest of today.

Chris Jaffe, who writes for The Hardball Times, has this spring released a comprehensive history and analysis of managers from the very beginning of major league baseball in 1876, "Evaluating Baseball's Managers". The book is arranged by era, and in doing so Jaffe shows how the job of field managing has changed over time; in baseball's early days, managers were more like GM's were today (as well as managing the team on the field). He shows how the job has evolved, and how very few field managers go into the executive suite today.

Virtually every significant manager in Cubs history, from Cap Anson to Frank Chance to Joe McCarthy (who the Cubs never should have let get away) to Charlie Grimm to Leo Durocher to Don Zimmer to Dusty Baker to Lou Piniella, is analyzed in depth.

After the jump, what I found to be the most significant topic from the past that could be applied to the game today.

One strategy that used to be used all the time by baseball managers is something Jaffe calls "leveraging". "Leveraging" is, simply put, the use of a manager's starting pitchers to maximum effect. He says that managers used to, instead of simply lining up their rotations 1 through 4 (or, if it were today, 1 through 5), they would save their best pitchers to go against the top teams, using their "lesser" starters against bad teams.

This practice, Jaffe writes, died out after the 1950's, although it was still used by some as late as 1964.

My question is: why don't managers try this today? Instead of giving five starters 34 starts each, why not try to have a couple of pitchers on your staff who could start, say, 20 or so times a year against the doormats of the league, saving your best pitchers for the games that count the most? To apply that to this year's Cubs, once Ted Lilly comes back, the Cubs would have two lefties (Sean Marshall and Tom Gorzelanny) who could do this, and throw in the bullpen at other times.

Now, you might say this might not work because of the way teams get scheduled now, or because, unlike the 1940's and 1950's, there are no teams that are consistently doormats. But why couldn't something like this work on an occasional basis? (Another possible answer: because no manager wants to go against "the book" and try something different, even if it's a strategy that worked for many years.)

Food for thought, anyway. I enjoyed this book and learned a few things; it's well worth your time. I'll have a few more book reviews later today. Full disclosure: I received a review copy of this book from the publisher.