Share All sharing options for: Book Review: "Willie Mays: The Life, The Legend" 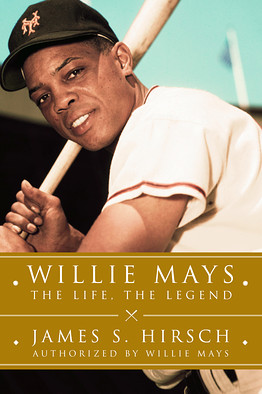 Continuing today's book review series, I had heard about "Willie Mays: The Life, The Legend" before it was released so I wound up going out to buy a copy not long after it hit the bookstores.

Willie is 79 now -- he's just a few months younger than Cubs Hall of Famer Ernie Banks -- and for those of you who never saw him play (I did, a few times, near the end of his career), you may not realize just how great Willie was. Willie's statistical record doesn't even begin to tell the story, which is well laid out in this biography (the first "authorized" bio of Mays; he cooperated with the author and gave many interviews for it).

The 660 HR that Willie hit could have been more -- he spent two years in the Army after his Rookie of the Year season in 1951. It can be argued, since he hit 41 and 51 homers the two years after his return, that he might have hit somewhere around 80 in the two years he missed -- which would have had him, not Hank Aaron, as the first to surpass Babe Ruth.

Mays, writes James Hirsch, had that kind of rock star aura, the aura that Ruth had, in his early years. It didn't start out that way -- recalled in May 1951 after hitting .477/.524/.799 (yes, a 1.323 OPS, that's not a misprint) in 164 plate appearances for the Giants' top farm club at Minneapolis, Mays couldn't buy a hit for his first couple of weeks in the major leagues. Depressed and thinking he was a failure, guess who helped him? That's right, his manager, Leo Durocher -- who stuck with him and became a father figure to him.

The book details Mays' childhood in Alabama, a fairly typical one for a young black man growing up in the South in the 1930's and 1940's; how his great athletic ability got him noticed and signed by the Giants; and how he made it to the major leagues just after his 20th birthday.

You'll learn a lot about the racism of the times and how Mays tried to rise above it and just be himself. He was criticized by Jackie Robinson at the time for not "doing more" to promote the cause of civil rights, but Mays felt he was helping just by being who he was -- and in some ways, he was correct: Willie Mays was probably the first black professional athlete to be viewed as a superstar for his performance, not for just being a black superstar.

Willie was even affected by racism after the Giants moved to the supposedly "progressive" city of San Francisco in 1958; the book explains why and how.

And, the book talks about the love shown for Willie when he returned to New York, traded to the Mets in 1972 at age 41, long after his abilities had declined. In some ways, it's similar to what you see today with Ken Griffey Jr. in Seattle -- and Griffey is only 30 career HR short of the man whose uniform number he wore when he began his career (now, Griffey wears the #30 his father wore).

This book is not only the comprehensive story of a man who (in my opinion) is one of the five greatest players in the history of the game. It's also a chronicle of one of the most important eras not only in baseball history, but in American history.