Book Review: "Traded: Inside The Most Lopsided Trades In Baseball History"

Share All sharing options for: Book Review: "Traded: Inside The Most Lopsided Trades In Baseball History" 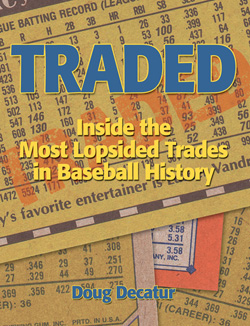 You're a Cubs fan. You look at the title of this book and you say, "I know what the most lopsided one was -- Brock for Broglio".

If you're saying that, at least by the measure Doug Decatur uses (Bill James' Win Shares), you'd be wrong. In Decatur's new book, "Traded: Inside The Most Lopsided Trades In Baseball History", Brock-for-Broglio doesn't rank in the top 300 such trades. It is, however, the one that got the Cardinals the most Win Shares of any deal in St. Louis history. As much as Cubs management has been criticized over the decades for making bad deals, the Cubs rank 12th overall in getting value out of these types of trades -- the Cardinals 24th.

This is just one of the fascinating things I learned from reading this book; there are, in fact, two deals the Cubs have made in the last 30 years that rank in the top 20 of most lopsided deals based on future Win Shares (and one really bad one that ranks in the top ten).

The top 300 lopsided deals of the 20th Century are ranked -- and it is, in fact, "20th Century" only; nothing after 1999 is listed, because there's not enough future Win Share value in post-1999 deals to make any such ranking meaningful.

Then, Decatur ranks all 30 current teams by net Win Shares gained -- in other words, adding up all positive Win Shares acquired by trade, subtracting all negative such totals, and arriving at what he terms "Net Future Win Shares". You'll likely be surprised by the team rankings; in each team chapter he details the best and worst such transactions in club history. You likely won't be surprised by the rankings in the Cubs chapter.

I have only one nitpicky complaint with this book -- whether by design or accident, each franchise is referred to throughout by its current location and nickname. It was rather jarring, when looking down the top 300 list, to see that Moises Alou was traded from the Pirates to the Nationals in 1990, that the Rangers got Claude Osteen from the Reds in 1961, and that the Twins acquired Mickey Vernon from the Indians in 1950 -- long before the Nats, Twins or Rangers moved to their current cities.

That's just a nitpick, though, as I said. This book was fascinating in its choice of topic, and, as in all such writing that involves rankings, creates controversy and useful topics for discussion. Full disclosure: I received a review copy of this book from the publisher.