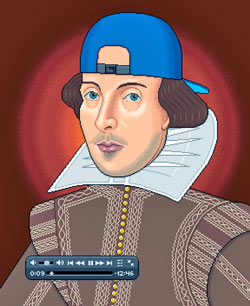 Chicago Mayor Richard Daley has proclaimed today, the 446th anniversary of William Shakespeare's birth (yes, I am aware that this may not be the actual date, and that the calendar has changed since then, but this is the recognized observation day) as "Talk Like Shakespeare Day" in the city of Chicago.

Not wanting to miss this important observance, I present the following, in tribute, and with apologies to the Bard:

Jeff Suppan started against the Cubs last Thursday at Wrigley Field; they hit him pretty hard, including homers by Marlon Byrd and Derrek Lee, but -- sound familiar? -- the Cubs' bullpen blew the game. Let's hope for better news vs. Suppan tonight. D-Lee, for his part, crushes Suppan -- .426 lifetime in 54 AB, and that was his sixth HR off him.

Ryan Dempster has a 2.88 ERA vs. the Brewers in his career, which includes 18 starts and 22 relief appearances. He, too, pitched in the series at Wrigley, on Opening Day, April 12, and got the win despite giving up a three-run homer to Ryan Braun. Current Brewers are hitting .269 (47-for-175) vs. Demp with eight HR.

Tonight's game is available nationally on WGN, and also for EI subscribers via FSN Wisconsin. Here is the complete MLB.com Mediacenter for today.

Please visit our SB Nation Brewers site Brew Crew Ball. But be careful over there.