Cubs Rally From Behind Again To Win, But Some Fans Miss It... Too Busy Waving?

Share All sharing options for: Cubs Rally From Behind Again To Win, But Some Fans Miss It... Too Busy Waving? 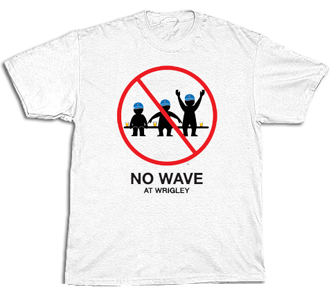 I was happy enough with the Cubs' second straight come-from-behind win, 7-5 over the Diamondbacks, that I could almost ignore the wave that began at Wrigley Field in the eighth inning.

Note, it says above, "almost". Come on, people. The wave? At Wrigley Field? As I wrote on the one other occasion when this happened, August 6, 2006, this thing belongs at a college football stadium, if anyplace at all. What bothered me most is that this started happening in the bottom of the eighth inning of a tie game, when the Cubs were busy with their game-winning rally. That should be a time for the crowd to be into the game, not doing stupid stuff like this. After it got around three times, those of us in the left field bleachers managed to help stop it.

I have no personal connection to the "nowavetshirts" website where I found the link above -- just found it via a Google search -- but I wholeheartedly endorse the concept. Enough. No more.

Now, to the game. It's been said many times that when Alfonso Soriano gets hot, he can carry a team. Now may be one of those times. After a slow start where he looked like his knee was still bothering him, Soriano started running better and fielding better at the beginning of this homestand -- and now he's homered in critical situations two days in a row, giving the Cubs the lead yesterday and tying the game in the 7th inning today, the homer today off ex-Cub Bob Howry, giving the Cubs some measure of revenge for the 13 balls launched into the seats off Howry in 2008. In his last 10 games Soriano is 11-for-34 (.324) with two doubles, three HR, 10 RBI and seven walks.

He's hot. Ride him as long as this lasts, because you know there will be cold spells where people here will call the contract an albatross, call him a "guess-hitting hack", etc. For now, Soriano looks like the guy who helped carry the 2007 Cubs into the playoffs.

Carlos Silva didn't quite have it today, although this outing was just mediocre, not terrible -- he gave up two HR to Mark Reynolds, who, after all, is a home run hitter. One of Reynolds' HR landed on Waveland in the glove of Ballhawk Dave. I thought Silva was getting squeezed -- in fact, all the pitchers today had a very small strike zone to contend with, which is likely why Carlos Marmol issued two walks in a nervous ninth inning.

Props to Jeff Gray and Sean Marshall for throwing three innings of one-hit relief and keeping the game close until the offense could come back; for a while it looked like the same old story. The Cubs left eight men on base in the first six innings, all of them in scoring position, all of them but two in scoring position with less than two out.

But Soriano's HR tied it, and then the Cubs put together a good long-sequence offense in the eighth. Ryan Dempster was called on to bunt after Geovany Soto led off with a single. Dempster popped up, but Tyler Colvin, running for Soto, got to second on a wild pitch. After Ryan Theriot and Kosuke Fukudome walked to load the bases, Derrek Lee came up.

At last, at last: D-Lee came through with RISP, hitting a two-run single, and then, more props to Derrek for breaking up a potential double play ball, even though the Cubs scored no more runs in that inning.

I could call out Aramis Ramirez for not hustling when he tried to stretch a single off the LF wall into a double in the fourth, but: the ball was played very well off the wall by Gerardo Parra, and he made a strong and accurate throw. It wasn't a matter of Ramirez watching his hit; replays showed he ran the ball out. And the Cubs won the game, so a little slack can be given here.

Not so for the wave. If you're at Wrigley -- don't start this. Don't go along with it if people near you want to start it. And do your best to stop it. No more waves at Wrigley.