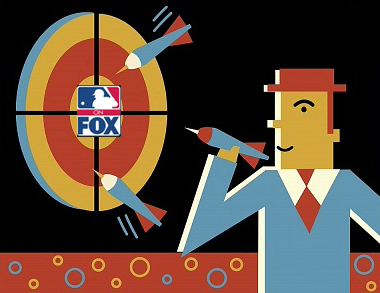 ARLINGTON, Texas -- The Cubs make their first appearance on a Fox-TV regional game tonight. Yes, tonight -- the Fox wizards, in their infinite wisdom, have decided to make two of their Saturday dates evening affairs. The other one will be on June 26, when the Cubs and White Sox will be featured (along with Red Sox/Giants and Yankees/Dodgers).

Tonight's announcers for the Cubs/Rangers will be Josh Lewin and Mark Grace. Great -- they assign the Rangers' main PBP man to this game -- I know Lewin once worked as a Cubs announcer, but I wonder where his loyalties will be tonight? And Grace... is just awful. More details and a link to a coverage map after the jump. Then again, the way the Cubs are playing, maybe some of you outside Chicago are happy to not see this game tonight.

Neither of tonight's pitchers has ever faced his opponent before. Randy Wells has thrown well his last two outings after the pounding he took in Pittsburgh, and all he has to show for them are a loss and a no-decision. Derek Holland started 21 games for the Rangers last year at age 22 and was pretty bad; since his recall from Triple-A this year he has made two starts, both good, both wins. Holland is a lefty, so heaven knows what lineup Lou will subject us to tonight.

Today's game, as noted, is on Fox. Fox's three other games are: Mets/Yankees, Red Sox/Phillies, and Tigers/Dodgers. Here's a useful map that should tell you what game you'll get in your area, and here is the rest of the MLB.com Mediacenter for today.