Cubs Show Power With Five Extra-Base Hits, But Wrigley Power Goes Out And So Does Winning Streak

Share All sharing options for: Cubs Show Power With Five Extra-Base Hits, But Wrigley Power Goes Out And So Does Winning Streak

OK, there's your variation on the obvious headline that says "lights out on Cubs winning streak" after a fire a few blocks from Wrigley Field forced a shutdown of the power grid nearby.

The lights went out just around the time it was getting dark at the ballpark, forcing an 18-minute delay. Tom Gorzelanny actually pitched better after the delay; his pitch to Blake DeWitt had just crossed the plate for ball four when the lights went out. After the delay ended, he retired the next six Dodgers in a row.

It's unfortunate, then, that Lou left him in to throw the sixth inning trailing 5-2; Gorz then gave up hits to the first three LA hitters in that inning, and by the time it was over the Dodgers had an insurmountable 7-2 lead on their way to a seemingly interminable 8-5 win over the Cubs last night.

Gorzelanny, in what seemed like an endless postgame news conference, kept answering the same questions over and over, but did mention he didn't think he deserved to go to the bullpen. In general, his performance this year would bear that out -- his 3.66 ERA is decent, his 1.35 WHIP not overly high, and he has allowed only two home runs in 51.2 innings. But he said he'd do whatever was necessary for the good of the team, and it seems most likely it will be Da Gorz headed to Da Pen when Carlos Zambrano returns to the rotation sometime next week.

While you can't blame Mike Fontenot for last night's loss, his presence at third base likely cost the Cubs two runs in the second inning. He launched a throw toward Derrek Lee on a Russell Martin ground ball that would have been a routine out for most ordinary major league third basemen. It would have ended that inning with no damage and the Cubs still trailing 3-0 after Gorz's rough first inning -- maybe that would have allowed the Cubs to mount an earlier comeback.

Instead, that led to a pair of unearned runs and a 5-0 deficit. Lou, please: forget the lefty/righty matchups at 3B. Jeff Baker is your backup third baseman. If Aramis Ramirez still isn't ready to play -- Baker has to play every day.

Fontenot made partial amends with a leadoff double in the last of the second and later scored; the Cubs sneaked to within 7-5 after Xavier Nady's pinch homer in the sixth and a three-run outburst in the seventh off a pair of Dodger relievers. But Jonathan Broxton was then summoned and was lights-out (ha! I had to make at least one lights-out remark, right?), and James Russell allowed a solo blast to Casey Blake, and the Cubs' winning streak was over. Credit to Jeff Stevens, and yes, even Bob Howry, for keeping the game close until the ninth.

This cubs.com story says this is the third time this has happened:

On June 24, 2003, there was an outage in the first inning against the Milwaukee Brewers. That delay lasted about 15 minutes. On May 6, 2003, the Lakeview neighborhood had a power outage and the lights went out at Wrigley for another Cubs-Brewers game, this time in the ninth inning. That stoppage lasted 15 minutes as well.

I recall, but don't have a specific date for, another outage sometime in the mid-1990's that was caused by a similar issue that resulted in last night's plunge into semi-darkness: a nearby fire that caused a transformer in the neighborhood to blow. You'd think the Cubs would want to have the lights on some sort of system that would prevent local blackouts from blacking out the ballpark too. The funniest thing about the whole incident last night was the enormous number of flashes from cell cameras going off when the lights went out -- it was reminiscent of all the flashes going off when the very first pitch of the first scheduled night game on August 8, 1988. Or, like this whimsical art piece made by Scott Mutter in the early 1980's (I have it hanging on the wall in my home office), pre-lights, imagining what Wrigley Field might have been like if fans lit up the game with powerful flashlights: 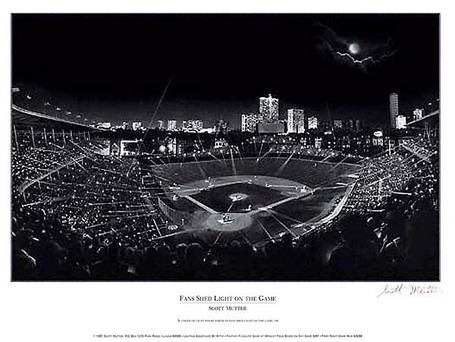 The Cubs can still win this series this afternoon (game preview will post at 11:30 am CDT) -- that's always the goal, especially against good teams: win series. Onward.