A Letter From Tom Ricketts.... About The Toyota Sign 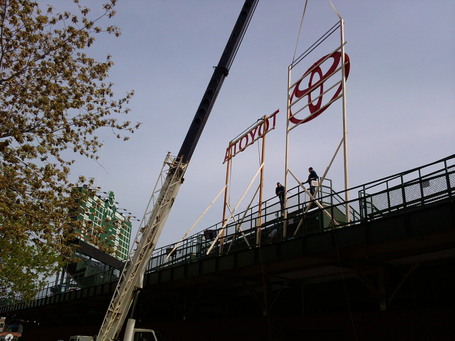 Earlier this afternoon I received an email from the Cubs, signed by chairman Tom Ricketts, regarding the proposed Toyota advertising sign.

Many of you may have received the same email. I'm posting it here because I know this has been a contentious topic of discussion among people I know both here and outside BCB.

My position is well known. I don't really care if a single sign is placed -- and no, I don't think it's a "slippery slope" which would result in Wrigley Field looking like Chase Field or Miller Park. It's bringing in money which can help the team in many different ways.

The only place where I disagree with Tom Ricketts' comments in the letter is where he says the opposition to the sign comes from "commercial interests of one particular building" -- obviously, you know the one he's talking about. Frankly, that's not quite true -- opposition as stated here by many of you has been for aesthetic and other reasons. For me, just as the rotating sign behind the plate, the Citibank sign that's now on the box seats near third base, and the Under Armour signs on the outfield doors -- I really don't care. They don't affect my focus and concentration on what's going on down on the field -- baseball. And if the money brought in by advertising helps the Cubs get better players so they can win the World Series -- I say go for it. About the only thing you can really criticize here is the choice of a company as an advertiser that is subject to quite a bit of controversy these days, none of it related to the Cubs.

After the jump, the complete text of the email.

You've probably been hearing about the Toyota sign we've proposed for the back of the left field bleachers at Wrigley Field. As fans and neighbors, we want you to know why this is important to the team and how it can help preserve the Friendly Confines.

As you know, Major League ballparks have historically relied on in-park signage to generate revenue. Legendary Fenway Park, older than Wrigley Field, has added significant signage throughout its outfield - and two World Series championships - in the last six years. Most other MLB teams also receive substantial public subsidies; we do not. In our case, we have asked for one sign in the outfield.

When we became owners, my family and I anticipated the need to spend tens, if not hundreds, of millions of dollars over the years ahead to preserve Wrigley Field. This past off-season, before we saw a single game as owners, we invested $10 million to shore up the infrastructure of the aging ballpark, renovate and expand its bathrooms, preserve our beloved scoreboard and replace some of the less attractive features of the park, like the concrete panels on the Addison street façade. As long-time Cubs fans, we know Wrigley Field is a special place and our hope is for future generations to share the wonderful experience of visiting the Friendly Confines.

In addition to the dollars invested in the park, we have maintained one of the highest payrolls in baseball and increased our budget for scouting and development - the key to future success. Winning a championship requires significant financial resources and we are currently reinvesting all profits - from the Toyota sign and otherwise - to make this happen.

Beyond the economics, there is an important principle at stake here. Wrigley Field has thrived for years as a privately-owned facility, albeit one where public interest is keen. We believe the park continues to be well-served by this principle which has guided its operation for nearly a century.

We have also been very respectful of the City's landmark designation and the process we have undertaken to win approval has been thorough. We've worked with the City and made adjustments, including modifying the location and design of the sign at the request of preservationists and City zoning officials. We've also worked with the rooftop businesses and in fact chose the proposed location because it least impacts those rooftop partners with whom we have long-term agreements. The landmark designation was never intended to put Wrigley Field in a time capsule. It's intended to allow flexibility and growth, within reason, to help the ballpark stay alive for the decades to come.

Finally, much of the opposition is rooted in commercial interests of one particular building and is designed to protect advertising currently on a rooftop across the street from Wrigley Field. Protecting the interests of one rooftop advertisement does not help preserve Wrigley Field or put together a championship team.

We would welcome your help and support for this sign. If you would like to lend your voice in support, please e-mail us at cubsfanfeedback@cubs.com.

I hope this information is helpful. Efforts like this are important as we continue to invest in our team and our 96-year-old ballpark. Improvements to Wrigley Field and modest changes throughout the years have kept the Friendly Confines alive while other stadiums have come and gone. Working together as we have allows us to remain viable and continue to flourish.

Thank you again for your help. And Go Cubs!