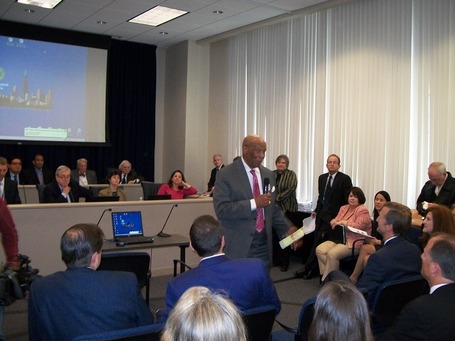 There's really no point in saying much about the 11-1 pounding the Pirates hung on the Cubs last night; it was the worst performance of the season. (They did get six hits, establishing that new most-games-without-being-no-hit record. Big whoop.)

However, the comments made by Randy Wells after the game are worth talking about:

"It's terrible," Wells said. "Unacceptable. Everything I've ever preached about why I'm successful, what I do to be successful, I totally got away from.

"I came in too cocky, too confident," he said. "Warming up in the bullpen, I don't think I missed a pitch. I'm laughing, joking around with [catcher Geovany Soto] before the game. I went out there and was all out of whack and let it get out of hand.

"When we needed a win the most to stop the bleeding, I got lackadaisical, wasn't on top of my game.

He didn't even take a breath in his monologue.

"That's pretty much all that happened," Wells said. "I can't throw strikes with the fastball, can't get ahead of hitters. You're flipping [bad] sliders in there, and not throwing strikes with your best pitch, which is your changeup, and that's the kind of stuff that happens. It's time to get back to work and have a reality check and realize what my job is here and what my main focus is, and that's to win ballgames.

"All that other [nonsense], [being] 3-0 and pitching for the Chicago Cubs doesn't mean [anything]," he said. "I'm here to win ballgames. As far as I'm concerned, after tonight, I'm no better than anybody. It's time to get back to work and have a good side."

Any time you don't think players are held accountable, think about those statements by Randy Wells. Wells held himself accountable, and did so in public -- you almost never hear players do that. I have absolutely no doubt that he won't let this happen again.

Even with the sweep in Pittsburgh, the Cubs did not lose any ground to the Cardinals, who have also lost three in a row. (They did fall half a game behind the Pirates.) All they can do is try to lay the same thing -- a sweep -- on the Reds, starting tonight. After the jump, some thoughts about Tom Ricketts and the proposed Toyota sign.

As noted in this FanShot posted by Jessica earlier this morning, the city landmark commission approved, by an 8-1 vote (with one abstention from a commission member who does business with Toyota in the city), the proposed Toyota ad that would hang behind the left field bleachers.

However, the article linked in the FanShot points out:

"I do not currently support the placement of a 360-square-foot Toyota sign in Wrigley Field, as it is not in keeping with the character of the neighborhood or with the spirit of the city's landmarks ordinance," Ald. Tom Tunney, 44th, said in front of a packed room at Thursday's landmarks commission.

You might wonder why this is so, considering aldermen generally are supportive of businesses in their wards, especially businesses that bring in as much money as the Cubs do. An article posted earlier this week on examiner.com answers the question, citing a letter from Tom Ricketts that I posted here, and quoting him:

In his letter, Ricketts addresses this issue by saying, "… much of the opposition is rooted in commercial interests of one particular building and is designed to protect advertising currently on a rooftop across the street from Wrigley Field. Protecting the interests of one rooftop advertisement does not help preserve Wrigley Field or put together a championship team."

He also points out how he and his family are committed to the team, are working with the City and rooftop owners, are cognizant of the landmark designation and what it means, and why the advertising is important for the sustainability of Wrigley Field and the future of the team.

I realize this has been a contentious issue among many here, and you all know my position: the sign is bringing in money. Money is what is needed to bring in better players, and improve Wrigley Field so it is the equal of all the new facilities being built across the major leagues. For those concerned that Wrigley might begin to look like the advertising-crazy Miller Park or Chase Field, read this from the examiner.com article:

In an exclusive interview with Examiner.com, Ricketts said, "I have no intentions of putting up other signs. This was the one place in the outfield where no revenue gets generated."

It's one sign. It's clear to me from the comments of Ald. Tunney and Tom Ricketts that Tunney's opposition is, as noted above, to protect "commercial interests of one particular building", not for the "character of the neighborhood" or other reasons Tunney gave at the landmark commission meeting. When all is said and done, I believe this sign will be approved by the City Council and be installed, and in a couple of years, we'll wonder what all the fuss was about.

More importantly, let's get the Cubs started on a long winning streak -- tonight.