Share All sharing options for: Cubs Will Reach Franchise Milestone On Saturday 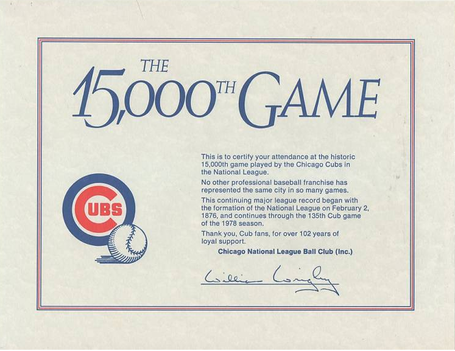 As all of you know, the Cubs and Braves are the only major league franchises in continuous existence since the start of the National League in 1876, and the Cubs the only one in the same city, with the Braves having moved twice in that 134-year span.

On September 3, 1978, the Cubs gave all fans in attendance -- yours truly included -- the certificate depicted above, marking the 15,000th game in franchise history. That day featured a scheduled doubleheader between the Cubs and Astros; the 15,000th game was the second game of the DH, which the Cubs swept to move to within 3.5 games of first place with a 69-66 record. In typical fashion in that era, the 1978 Cubs then went 10-17 the rest of the way and finished third, in a year the old NL East was won with 90 victories.

Anyway, I mention all of this because a little short of 32 years later, the Cubs will mark the 20,000th game in franchise history on Saturday night, when they take on the White Sox at the Cell. Unfortunately, since it's a road game, there won't be any certificates issued. And if you had told me on September 3, 1978, that the Cubs would mark their 20,000th game by playing the White Sox in a regular season game at a stadium called "U.S. Cellular Field", well, at the very least, I would have laughed at you.

The Braves, who began NL play at the same time the Cubs did, have played 34 fewer games in their history, due to various factors including postponements not made up, and labor stoppages. The Cubs' all-time record as of this morning is 10,196 wins, 9,639 losses and 160 ties.

There's another significant individual anniversary for the Cubs coming up on Saturday. Follow me past the jump for details.

June 26 marks the 50th anniversary of Ron Santo's debut as a Cub; he made his first major league appearance in a doubleheader in Pittsburgh.

Santo had two singles, a double, and five RBI as the Cubs swept the team that would win the World Series that season, 7-6 and 7-5.

As this FanShot posted by kaseyi this morning indicates, Santo is going to be cutting back his WGN broadcast duties for the rest of this year (and likely in the future) for health reasons. Kasey notes that:

Some people love his work on WGN, Some people hate it, but Ronnie IS the voice of the Cubs.

I'd agree. He's as much a fan as any of us, and for that, I know he feels the wins and losses just as we do. I wish Ron well, and hope the Hall of Fame inducts him next year when the Veterans Committee will vote again.