Just a quick plug for the annual "Road to Wrigley" game on July 7. Clearly, the chance to see a game at Wrigley Field for minor league prices is the biggest attraction, but the Chiefs could use your support and maybe Hak-Ju Lee will turn in one of those highlight reel plays he's become known for. 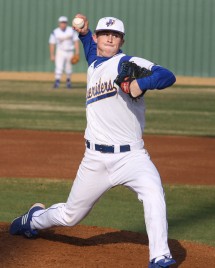 The number nine Cubs prospect as chosen by you is Hayden Simpson, this year's first round pick who has yet to take the mound for the Cubs. But at Southern Arkansas, he was reportedly hitting 97 mph on the radar gun with a strong slider that he can throw for strikes.

Today's addition to the vote is a reclamation project, RHP Thomas Diamond. On the down side for Diamond, he's 27 years old and the Cubs claimed him when the Rangers put him on waivers. He was once upon a time the tenth pick in the draft who could throw 95-97 mph, and was Baseball America's #52 prospect in all of baseball in 2005. But he had arm problems, underwent Tommy John surgery and missed all of 2007. His velocity only got back to 91-92 mph and the Rangers put him on waivers. But this year, despite the diminished velocity, he's been pitching much better and has a 5-2 with a 2.53 ERA. He's fanned 87 and has walked 33 in 85 innings so far.

Traveling home from New Orleans. It's going to take a while since I think they're going by riverboat.

Chris Carpenter improved his record to 6-3 with five shutout innings today. Carpenter gave up five hits. He walked three and struck out three.

Brett Jackson just keeps on rolling. Today he got half a day off by DHing, and he went 3 for 4 with two doubles and a walk. Jackson scored twice and had three RBI. He also stole a base.

Left fielder Brandon Guyer also had a great game, going 4 for 5 with a double. He scored twice and had two RBI. Third baseman Josh Vitters was 2 for 4 with a double and a walk. VItters scored once.

Catcher Robinson Chirinos hit his eighth home run of the season. It was a three-run blast in the eighth inning. Chirinos was 1 for 4 with a walk.

The Daytona Cubs capsized against the Brevard County Manatees, 5-3.

David Patton took the loss in relief. Patton gave up two runs in the one inning he pitched. Patton allowed two hits and walked three. He did not have a strike out.

Second baseman David Macias was 3 for 4 with a run scored. Shortstop Junior Lake was 2 for 3

Catcher Michael Brenly finished up his big month of June by hitting his fourth home run, a solo shot in the second inning. Brenly was 3 for 4, and you'd never know about it if you hadn't read it here.

The Peoria Chiefs got stung by the Burlington Bees, 5-4.

Starter Ryan Searle took the loss. He went five innings and allowed four runs on four hits. Two of the runs were unearned. Searle walked three and struck out five.

Second baseman Matt Cerda was 2 for 3 with a walk. He scored twice and hit one runner in. Left fielder Greg Rohan was 2 for 4 with a triple. Rohan had two RBI and scored once.

The Boise Hawks fell to the Eugene Emeralds, 7-3.

Yao-Lin Wang started and gave up three runs over three innings. Wang gave up five hits and walked two while striking out four.

Second baseman Pierre LePage was 2 for 5 with a double and three RBI.

Third round pick, catcher Micah Gibbs, made his professional debut. He was 0 for 4.