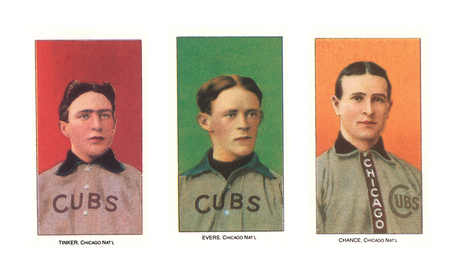 This poem, penned by Franklin P. Adams and published in the New York Evening Mail a century ago, is well-known to nearly every baseball fan. (And though I have seen the second-to-last line printed with the word "weighty" instead of "heavy", the original piece of doggerel did indeed use "heavy.)

For many years, it was thought that July 10, 1910 was the publication date. However, I have learned from Jack Bales, a librarian at the University of Mary Washington in Fredericksburg, Virginia (and a big Cubs fan) that his research shows that today, July 12, is the actual centennial of the publication of this poem. After the jump, a reproduction of excerpts of Bales' research that proves this date.

From Jack Bales -- parts of an article he wrote about "Baseball's Sad Lexicon" for his local newspaper last May, and many thanks to Jack for sharing it with me, so I could share it with you, as we take a break from the 2010 season for a few days.

It was "Baseball’s Sad Lexicon," however, that was reprinted all across the country and in dozens of anthologies. Often called "Tinker to Evers to Chance," it is the second-best-known baseball poem in America—close behind Ernest Thayer’s immortal "Casey at the Bat," written in 1888.

Adams’s verse was destined to have far-reaching effects on the 3 teammates as well as on the publishing world. It is largely credited with getting them inducted into the National Baseball Hall of Fame together in 1946. Indeed, more than a few baseball statisticians sniff that Tinker, Evers, and Chance never did lead the league in double plays, and that it was the poem’s cadence rather than the players’ craft that paved their way into the fabled Hall in Cooperstown, New York.

Countless sources state that Adams’s famous bit of doggerel was published in the July 10, 1910, issue of the New York Evening Mail, the day Adams saw the Chicago Cubs play the Giants at New York’s Polo Grounds.

The problem? When Tim Wiles, Director of Research at the National Baseball Hall of Fame, and I began researching the poem’s centennial, it did not take long to notice that the Cubs were playing in Chicago that day. Furthermore, July 10, 1910, was a Sunday, and the Evening Mail was not printed on Sundays.

Some researchers maintain that the poem was first published on July 18 that year. If that’s true, how did it appear in the Chicago Daily Tribune a few days earlier under the title "Gotham’s Woe"?

A bit of checking revealed that just two libraries held the newspaper for 1910. Just one—the Center for Research Libraries in Chicago—would loan the microfilmed summer issues, and it lent items at no charge only to members of its library consortium (others, understandably, had to pay a rather hefty fee). Fortunately, my alma mater, Illinois College in Jacksonville, belongs to the group, and I emailed its library director, Martin Gallas. He readily agreed to borrow the microfilm and skim the pages for the month of July.

Gallas did more than just that. He carefully pored over the Evening Mail for the entire months of June, July, and August. He turned up not only "Baseball’s Sad Lexicon" in the issue for July 18, but also the original publication of Adams’s poem, which appeared on July 12 under the title "That Double Play Again." (Not surprisingly, on July 11, Cubs players Joe Tinker, Johnny Evers, and Frank Chance turned a double play against the Giants in a 4-2 win for the Chicago team.)