Share All sharing options for: Book Review: "The Curse" 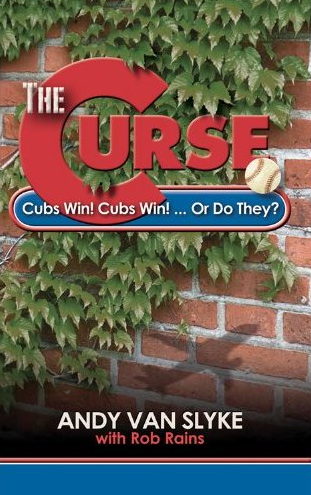 I had intended to write this review this morning, and when I was ready to get started I noticed this FanShot which, among other things, accuses Andy Van Slyke, who played for two big rivals of the Cubs (the Cardinals and Pirates) in the 1980's and 1990's, of just trying to make a buck off the Cubs, or of playing off a "Cubs curse".

Neither is true. I had a chance to meet Van Slyke at a news conference for this book yesterday, and he's not the typical ballplayer-who-hired-a-ghostwriter-for-his-book.

Though he never played for the Cubs, nor does he have any connection with Chicago (he's originally from upstate New York), Van Slyke said he always enjoyed playing in Wrigley Field as a visitor and would have loved to play for the Cubs if he'd had the opportunity. He said he enjoyed the ballpark and the energy that the fans brought to the games. He claimed to have had a .370 lifetime average in Wrigley Field; like a lot of ballplayers, his memory doesn't match the facts, although his numbers in Wrigley were the best he had in any ballpark: .316/.397/.540 with 15 HR in 366 career plate appearances. Van Slyke did say at the news conference that he thinks day games do hurt the Cubs; he says the constant schedule-shifting could be the issue. Since he never played here, his opinion is anecdotal from his experiences as a visiting player. The schedule, for example, didn't stop the Cubs from winning 96 games in 1984 with an all-day game home schedule, or 97 games in 2008.

The book has nothing to do with any "curse", really -- I think it's a rather unfortunate title, probably designed to sell books. But the idea and concept are clearly Van Slyke's. One of the primary characters is named after Van Slyke's high school baseball coach, a man he said had an incredible influence over his future baseball career, and a man who in the book overcomes many obstacles to succeed. The co-author, Rob Rains, is a longtime St. Louis sportswriter who Van Slyke knew from his days as a Cardinal. This novel is clearly a collaboration, though, not simply a ghostwritten book using an athlete's name. After the jump, a review of the book itself.

"The Curse" is one of the better baseball novels I've read. It weaves real-life people in with the fictional ballplayers and peripheral characters invented for Van Slyke and Rains' scenario, which involves tragic events that change the course of a first-place Cubs season. The authors said the book was originally intended to come out in 2008, the 100th anniversary of the last World Championship, but got delayed.

Instead of being sold by the Wrigleys to Tribune Co. in 1981, the novel has the team sold in that era to an individual who appears to be a Cubs fan, but in reality, there's a lot more going on in this man's life than just owning a baseball team. The authors do a nice job of weaving real-life events and people that we all know about the last 30 years of Cubs history in with the fictional setting and characters of the novel.

When the tragedy happens -- and I won't spoil it for you by telling you what it is, although there's a clue in the cover photo above -- the book becomes a pretty good whodunit as well as a lesson in how people can overcome tough or tragic incidents in their own lives. That's what Van Slyke said in the news conference -- that he hoped the book would be a positive portrayal of baseball and human relationships.

Many of the portrayals of characters in the novel will seem to you to be composites of people you have heard of or know of in real life. The Cubs manager, in particular, is someone who we'd all probably want to manage the team in the future (and at this juncture, I might take a fictional character to manage the Cubs instead of Lou Piniella). There are also a few players who play for the ersatz Cubs who resemble real players (not necessarily Cubs) from the current era.

Don't judge this novel by its title. It's well-written, thought-provoking and entertaining and definitely worth your time. You can find it at this Amazon link. Full disclosure: the publisher sent me a copy of this book for review.