Who Should Replace Lou Piniella As Cubs Manager?

Share All sharing options for: Who Should Replace Lou Piniella As Cubs Manager? 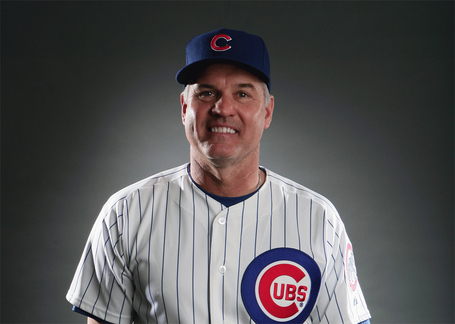 Ryne Sandberg is my choice. Who's yours?

We are at a unique place in modern Cubs history. For the first time since the College of Coaches era ended with Leo Durocher's emphatic statement on his hiring on October 25, 1965, "I'm the manager. I'm not a head coach, I'm the manager.", the Cubs are facing a situation where they'll have a managerial opening not created by a firing (or non-renewal of a contract, as in the case of Dusty Baker, which essentially was a firing) or some similar negative departure.

Leo Durocher, fired July 25, 1972. Durocher claimed he "stepped aside", but that was just to allow him to save face because P.K. Wrigley liked him.

Jim Marshall, fired November 23, 1976. Marshall did an OK job with some really untalented Cubs teams and was only 45 at the time of his firing. He managed the A's to a 54-108 record in 1979 and was never heard from again. (Well, in a baseball sense, anyway.)

Herman Franks, quit on September 24, 1979 with seven games left in the season. He was scheduled to announce his retirement -- and did, in fact, never manage again -- but instead quit and blasted many of his players. Joe Amalfitano finished the season.

Preston Gomez, fired July 25, 1980. Baseball-reference.com says the Cubs' record was 39-52 at the time of his firing, but it also says Gomez's record was 38-52, and newspaper accounts of the firing also say the record was 38-52. The discrepancy comes from a game suspended on May 28, 1980 that was finished on August 8, when Amalfitano again was the manager. The Cubs won that game with a walkoff grand slam, one of the few highlights of that 98-loss year. That win is credited to Amalfitano.

Lee Elia, fired August 22, 1983. Elia was on the hot seat for a number of reasons, including his legendary early-season profane tirade, but when he admitted he had "never heard of" Braves rookie (and future Cubs batting coach) Gerald Perry after he torched the Cubs in a weekend series, Dallas Green fired him. Charlie Fox finished the year on an interim basis.

Gene Michael, resigned September 7, 1987. Michael, who seemed to pine for being with the Yankees the entire time he was a Cubs coach and manager, apparently told the media he was going to quit before he told Green. Green himself was forced out at the end of the year, a huge mistake. Frank Lucchesi finished the season.

Don Zimmer, fired May 21, 1991. Zimmer, brought back as manager in 1988 only a year and a half after being dismissed as 3B coach, became the first Cubs manager to last more than three seasons since Durocher. He had given management an "ultimatum" to decide on his future by July 1. They did; they fired him. Coach Joe Altobelli managed one game and then the season was finished by Jim Essian, who was viewed at the time as a hot managerial prospect, but...

Tom Trebelhorn, fired October 17, 1994. Trebelhorn had been successful in Milwaukee, but was canned after a horrid season in which the Cubs lost their first 12 home games and Trebelhorn held an impromptu meeting with fans outside the firehouse on Waveland.

Jim Riggleman, fired October 4, 1999. Riggleman was the first Cubs manager to manage five full seasons since Durocher, but was dumped after a season in which the Cubs started 32-23, only to finish 35-74 amid accusations that Riggleman's players quit on him.

Don Baylor, fired July 5, 2002. This dismissal came with a year and half left on a four-year contract. Jim Hendry was named general manager the same day. Baylor had given Cubs fans some hope with a contending season in 2001, but his managing style and a 34-49 record the next year led to his axing.

Dusty Baker, contract not renewed at the end of the 2006 season. Baker, Marshall and Riggleman are the only former Cubs managers since Durocher to get another non-interim managing job.

As I said, not a pretty list, but Lou Piniella is going out on his own terms, even if not in a season he'd like to remember. He won't manage again, regardless of what rumors you may hear; he's supposed to be getting a deal to be a Yankees "consultant", which may lead to him making an appearance at spring training for them and otherwise just enjoying his retirement.

I have made it clear that my preference for the next Cubs manager is Ryne Sandberg. Sandberg applied for the job when Baker was fired and was told he'd need to get experience. And while you might not expect a Hall of Fame player to do this, he went to the lowest rung of the minor leagues, rode the buses, learned his craft and has been praised by his players and by Cubs management. He has done everything he has been asked to do and in my opinion, has earned the shot -- unless Joe Girardi suddenly drops into the Cubs' laps. It's my understanding that unless the Yankees collapse this year and don't make the playoffs, or have a 2004-style meltdown in the postseason, Girardi will be offered a new deal to stay in New York, and he'll accept it.

With that, I'm going to post, after the jump, the pluses and minuses as I see them for thirteen men (call 'em the "lucky 13" if you like) whose names have been mentioned as candidates to replace Lou, either in other media, here, or both. There may be other names, but these seem to be the not-so-short "short list". I'll try to be as objective as I can listing these, even though I have a preferred candidate.

Finally, about Jim Hendry being the one to make this choice: I've never been one of the torches and pitchforks crowd wanting him fired. Is he the best GM in the game? No. Is he the worst? Far from it. I also don't see anyone suggesting a replacement who is both a) better and b) available. That being the case, I think it's fine for Hendry to get a chance to clean up this mess. He can start by hiring Ryne Sandberg.

This list, as is the poll attached to this post, is in alphabetical order. Ages listed will be the potential manager's age as of Opening Day 2011.

Bob Brenly. Age: 57. Current job: Cubs TV analyst. Pluses: managed a World Series championship team. Doesn't mince words on the air when he sees the game not being played right and presumably, would do the same as a manager. Understands the nuances of the game well and often says he knows how hard the game is because he was a .247 hitter. Minuses: seems to enjoy his current job, the pay scale there and the lack of pressure. Has been out of managing for six years.

Joe Girardi. Age: 46. Current job: Yankees manager. Pluses: four years' managerial experience, one World Series title and a good shot at another one this year. Played for three Yankees World Champion teams. Also played for the Cubs and grew up a Cubs fan and has a good understanding of the Cubs organization and culture. Minuses: won't be available.

Fredi Gonzalez. Age: 47. Current job: unemployed. Pluses: highly regarded as a coach under Braves manager Bobby Cox. 3 1/2 seasons managing a small-payroll Marlins team to the edges of contention. Showed his leadership in an incident with Hanley Ramirez earlier this year. Minuses: may have been fired by Marlins in part for the Ramirez incident. Is likely to be first in line to succeed Cox, as the Braves still think highly of him.

Tony LaRussa. Age: 66. Current job: Cardinals manager. Pluses: 30+ years managing experience, multiple playoff appearances, third on all-time manager wins list. Minuses: if he doesn't stay in St. Louis, the north side of Chicago would probably be the last place he'd go. He'd be more likely to retire than be Cubs manager; LaRussa's only on this list because he was mentioned in a comment here. It would be a real outside-the-box hire and extremely implausible. Also, likely too old.

Pat Listach. Age: 43. Current job: Nationals third base coach. Pluses: managed three years in the Cubs farm system and was highly praised by all. Is the youngest man on this list and that might help relating to younger players. Minuses: no major league managerial experience, and giving him the job over Sandberg would be a real slap at Ryno. If Sandberg is hired, Listach could wind up on his coaching staff.

Dave Martinez. Age: 46. Current job: Rays bench coach. Pluses: this is his fourth year as bench coach in Tampa; went to the World Series with them in 2008. Highly regarded by one of the better managers in today's game, Joe Maddon. Minuses: there's absolutely no way the Cubs give Martinez this job and snub Sandberg. No. Way.

Jose Oquendo. Age: 47. Current job: Cardinals 3B coach. Pluses: 12 years major league coaching experience. one year as manager in Cardinals minor league system. Like Cora, from Puerto Rico and could relate to Latino players. Minuses: 12 years major league coaching experience, starting as a bench coach, then being "demoted" to 3B coach. If he's that good a managerial prospect, why is he apparently stalled here? Obviously, wasn't going to be promoted over LaRussa, but why hasn't he had any offers?

Ryne Sandberg. Age: 51. Current job: Triple-A Iowa Cubs manager. Pluses: Hall of Fame playing career. Started at lowest levels of organization to learn managing. Praised by players and upper management. Popular with Cubs fans. Minuses: no major league managing or coaching experience. Popularity could work against him if he struggles or team struggles under him. Has had to learn how to control his temper to avoid ejections.

Ted Simmons. Age: 61. Current job: Padres bench coach. Pluses: has served as a GM (with the Pirates), understands that role; also was a director of player development and a scout. Has served in many different jobs in baseball with a number of teams. Minuses: probably too old; Cubs likely need a younger voice. Also has had health issues (resigned as Pirates GM in 1993 after a heart attack).

Joe Torre. Age: 70. Current job: Dodgers manager. Pluses: 29 years as MLB manager, multiple World Series championships and playoff appearances. Minuses: likely way too old to start over with a new team, and has made it pretty clear the Dodgers are his final managing stop.

Alan Trammell. Age: 53. Current job: Cubs bench coach. Pluses: Outstanding playing career, good working with young infielders, three years major league managing experience. Minuses: those three years were all losing seasons, though he did help the Tigers improve 29 wins from 2003 to 2004. Has a reputation as being a real nice guy, but that could be a detriment -- he might be too nice to be a manager, but work very well as a coach.

Bobby Valentine. Age: 60. Current job: ESPN baseball analyst. Pluses: 15 years managerial experience, one NL pennant. Also managed successfully in Japan, which could give him a different perspective than other managers. Minuses: has clashed with his GM's. Has interviewed for several jobs since his firing from the Mets without being hired, calling into question the reasons for that. Has not managed in MLB in eight years and may be getting too old for a challenge like the Cubs.

There may be other men who aren't on this list that the Cubs will consider, but in my view, the bottom line is this: if somehow Girardi becomes available (and the chances of that are extremely small), he should be the choice. Otherwise the Cubs should reward Ryne Sandberg for his hard work for the organization and the credentials he now has with four years' minor league managing experience. BCB's minor league editor Josh77 has been working on a longer piece about Sandberg and what he's accomplished as a manager in the organization; he'll be posting it soon.