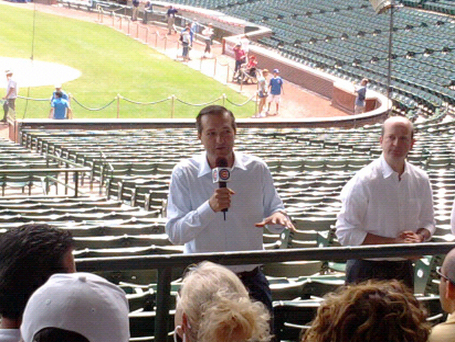 In four separate sessions today (these are still going on this afternoon), the Cubs invited season ticket holders to the ballpark to explore various areas that are usually off-limits, including the entire field. There were long lines to stand on the mound or get photos taken at home plate; they opened up the PNC Club (very nice, incidentally) and the batting cage beneath the right field bleachers for public view.

About 800 people were at the session I attended, at 11:30 this morning. The sun came out just in time -- Tom Ricketts told me that while he was driving in, it was briefly raining and they had to start the earlier morning session with the tarp on the field. But it stopped, cleared out and they were expecting similar numbers of season ticket holders to attend afternoon sessions.

The Cubs opened the clubhouse, though just for viewing, not for walking in; Carlos Zambrano's locker, right at the entrance, was still filled with various jerseys, personal items and, on the top shelf, about six bats. Across the hallway from the clubhouse, in what used to be the umpires' dressing room, is a private lounge for the players where they can go. No media is allowed in that room. It contains several large couches, a lounge chair, a large flatscreen TV, snacks, drinks, books and magazines, and a fully equipped version of the Rock Star video game with two guitars. This was designed with the help of several Cubs players and is all part of the eventual plan to have upgraded player facilities when the Triangle Building is built. It was, unfortunately, too crowded in there to get any decent photos.

Cubs management including Tom Ricketts, Crane Kenney, Wally Hayward, Carl Rice, Mark McGwire, Jahaan Blake, Frank Maloney and Mike Lufrano (who is pictured at Tom Ricketts' left above) were there and talked to many fans. Ricketts took notes when people brought things to his attention; I'm still hoping to arrange another sit-down interview with him later this season.

After the jump, a photo of fans on the field this afternoon. 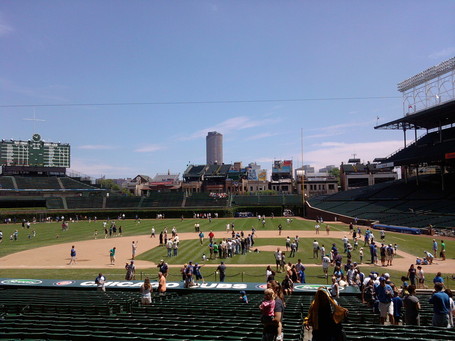