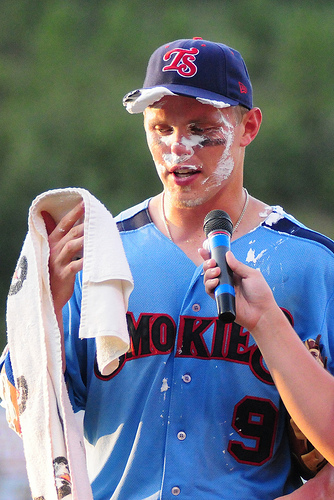 The Smokies couldn't hide from the Chattanooga Lookouts, 5-3.

Starter Chris Carpenter took the loss. He pitched 5.2 innings and allowed all five runs, although one run was unearned. He gave up six hits and walked four. On the plus side, he did fan seven batters.

Left fielder Brandon Guyer hit two home runs, a solo homer in the second inning and a two-run shot in the fourth. Guyer now has 11 home runs this year. Guyer was 2 for 4. The photo of Guyer on the left is not from tonight's game.

Center fielder Tony Campana went 2 for 4 and stole his 41st base.

The D-Cubs scored three in the seventh and one in the eighth to beat the Dunedin Blue Jays, 8-7.

Alex Maestri pitched three innings and got the win in relief. Maestri allowed only one hit, although it was a solo home run. Maestri walked one and struck out three.

James Leverton got his fifth save. Leverton pitched one inning and allowed one hit but no runs. He did not have a strikeout or issue a walk.

First baseman Rebel Ridling hit his 12th homer of the year, a three-run homer in the third inning. Ridling was 2 for 3 with a double and a home run. He also walked once. Ridling scored twice and had the three RBI. Third baseman DJ LeMahieu was 2 for 4 with two runs scored and an RBI.

Catcher Michael Brenly was 3 for 4.

The Chiefs were shut out by the Beloit Snappers, 2-0.

Brett Wallach had his first good start for the Cubs organization tonight. He pitched six shutout innings and allowed only two singles. He walked two and struck out six.

Ronny Moria pitched one inning of relief and took the loss. He gave up both runs on three hits and a walk. Moria did strike out two.

Eduardo Figueroa started and allowed all three run on seven hits over 4.1 innings. Figueroa walked two and struck out three.

Matthew Loosen was brilliant in relief and got the win. He went 3.2 innings and allowed only one hit. He didn't walk anyone (although he did hit a batter) and he struck out five.

Andres Quezada pitched the ninth and allowed only one baserunner via an error. He did not strike anyone out as he got his first save of the season.

Right fielder Alvaro Ramirez and second baseman Pierre LePage both went 2 for 4. Ramirez had an RBI and LePage stole a base and scored a run.