Cubs Carry Harry In The Air

Share All sharing options for: Cubs Carry Harry In The Air 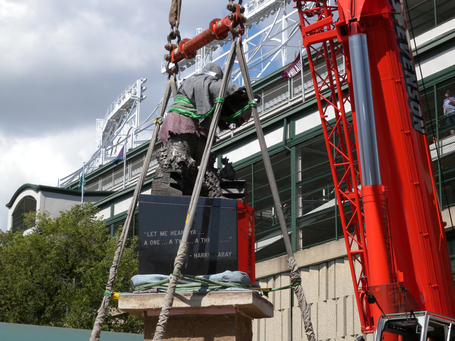 Harry Caray spent 16 years on the air as the Cubs' principal play-by-play announcer.

Today, Harry's statue was in the air as it was lifted out of the place where it has been since April 12, 1999 at the corner of Addison & Sheffield, headed to its new home one block north, outside the bleacher entrance.

I watched the process this morning -- a fascinating precision procedure done by a couple of dozen men to make sure the statue was safely lifted out of a hole about five feet deep, onto a flatbed truck. Some Cubs employees and about 20 other people watched all of this; I also met Lou Cella, who designed Harry's statue, as well as the Ernie Banks statue and also the Billy Williams statue that will be set in the Addison & Sheffield location and dedicated next month. Nice to have also met BCB'er Tangled Up In Blue, who stopped by to watch.

Thanks also to BCB'er ballhawk for making this FanPost yesterday which showed some of the preliminary work on both sites. When the Harry statue is set in place outside the bleacher entrance I hope to post more photos.

After the jump, a slideshow similar to ballhawk's, on today's move.

For some reason, I have to put text above the slideshow or the jump gets deleted, so here is that text.