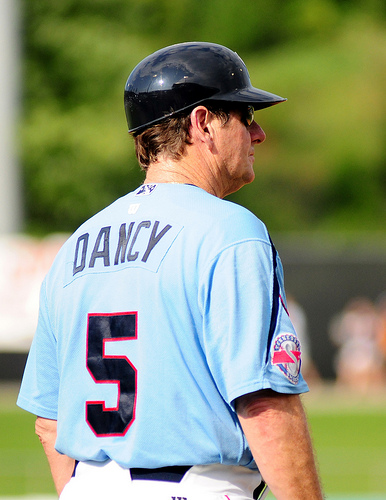 The big news tonight and in fact, this entire season, has been the Smokies, so we're going to lead with them.

The game was started by Trey McNutt, who pitched the first four innings and gave up four runs on six hits. Two of the four runs were unearned, however. McNutt struck out four and walked only one.

Kyle Smit pitched the top of the ninth and improved his record to 4-1 since coming over to the Cub organization. Smit allowed just one hit. He didn't walk anyone and struck out one.

Canzler's home run in the bottom of the ninth was not without controversy. The ball apparently bounced off a restraining wall behind the outfield fence and came back on to the field of play. Canzler slid into third with a triple, but after a long discussion between the umpires, it was ruled a home run. It was Canzler's 20th home run this season. Canzler was 1 for 5 on the evening.

If not for Canzler's heroics, the star of the night would have been left fielder Brandon Guyer. Guyer was 4 for 5 with two doubles and four RBI. He scored once.

Huntsville's double-header was rained out again, so the Smokies magic number rests at one. Unless they decide not to make up both games, in which case the Smokies clinched their third straight half-season title.

In any case, the Smokies will be looking to clinch tomorrow.

The Iowa Cubs fell to the Omaha Royals, 5-4.

Starter Austin Bibens-Dirkx took the loss. He lasted 4.2 innings and was charged with five runs on five hits. Two of the runs he allowed were unearned. Bibens-Dirkx walked four and struck out three.

First baseman Bryan LaHair hit a two-run homer in the eighth inning. It was LaHair's 21st homer of the year. LaHair was 1 for 4.

Memphis won again, so the I-Cubs lead in the division fell to a mere one-half game. The two teams finish the season against each other with a four-game series in Des Moines.

The Daytona Cubs were shot down by the Lakeland Flying Tigers, 3-0.

Nick Struck was the hard-luck loser tonight. Struck pitched the first four innings and allowed only one run on three hits. Struck walked three and struck out four.

Catcher Mark Reed was 1 for 3 with a double.

The Chiefs allowed only two hits tonight. Marcus Hatley, who is on a strict pitch count since coming off an injury, started and pitched 2.1 innings, allowing only one hit. Hatley walked two and struck out five.

Left-hander Austin Kirk collected his first Peoria win by pitching the next 5.2 innings. Kirk allowed only one run on one hit. He walked one and struck out four.

Left fielder DJ Fitzgerald was 4 for 4 with two doubles and a triple tonight. He had four RBI. Center fielder Anthony Giansanti was also perfect, going 3 for 3 with a double and a walk. He scored once and had one RBI.

Shortstop Hak-Ju Lee was 2 for 5 with a double. Lee scored twice and had one RBI. Right fielder Jae-Hoon Ha had a double and a run scored in a 2 for 4 evening.

The Chiefs are now three games out of a wild card spot with ten games to play.

The Boise Hawks lost to the Spokane Indians, 3-2.

Brett Ebinger started and took the loss. He pitched five innings and allowed three runs on six hits. He didn't walk anyone and struck out three.

Right fielder Alvaro Ramirez went 2 for 4 with a double. He had one RBI and scored once.