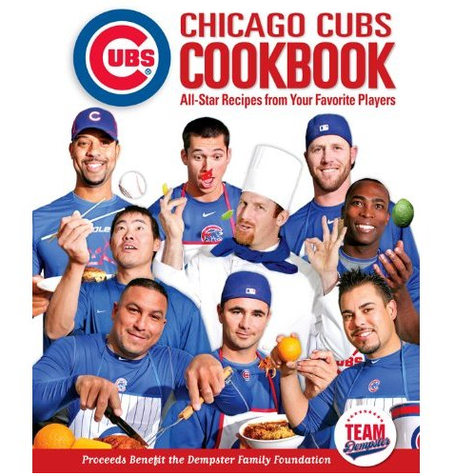 Let me preface this by stating: I am not a cook.

Thus, this book wouldn't be very useful for me; I enjoy eating, but my cooking skills are limited to making sandwiches and heating stuff up in the microwave.

However, if you do like cooking, there are plenty of good recipes in the Chicago Cubs Cookbook. It would appear that a lot of the players featured in this book can't cook either, because many of their favorite recipes come from restaurants in the Chicago area. The good news is that those recipes are in the book, so you can make things you like from places like Harry Caray's, Twin Anchors, Hub 51, and D'Agostino's.

Many of the other recipes are from friends and family members of the players and coaches featured (Len Kasper's mom, Tyler Colvin's fiancee, Marlon Byrd's wife, and a Japanese recipe from Kosuke Fukudome's translator). Some of the players do contribute recipes they make themselves (a hot wing dip from Randy Wells and spaghetti squash pasta made by last year's #1 draft pick Brett Jackson) look pretty good.

It's clear that just-traded Ted Lilly isn't much of a cook. He contributed a recipe for chili from Stanley's (at Lincoln & Armitage) that he liked, and also something for "Egg in the Hole", which Ted says his father taught him how to do... the ingredients given are "1 slice whole wheat bread, 1 egg, butter".

There are other recipes contributed by Cubs Hall of Famers Billy Williams, Fergie Jenkins and Greg Maddux and "The Ricketts Family Cut-Out Vanilla Almond Cookies."

And, know that if you buy this book, the proceeds benefit the Dempster Family Foundation. The Cubs were nice enough to give me a review copy of the book. Enjoy the rest of the off-day; you can order the book from the link above in this post, but know that they are temporarily out of stock. There's a second printing being done right now and they should be available in a couple of weeks.