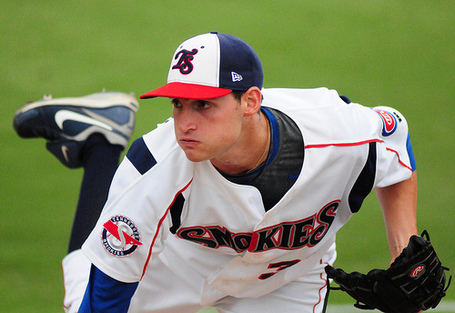 Chris Carpenter mows them down. Courtesy of Roger C. Hoover and www.smokiesonradio.com

Chris Carpenter picked up the win tonight with an impressive start. He went six innings and allowed only one unearned run on four hits. Carpenter walked three and struck out eight--including the only Diamond Jaxx runner to score, who reached on a strikeout/passed ball in the fifth inning.

Luke Sommer, Esmailin Caridad and Blake Parker shut down West Tennessee the rest of the way.

Center fielder Brett Jackson got the scoring started in the third inning with a solo home run to right field. Jackson was 1 for 4 with a walk tonight.

The Smokies added another run in the fourth inning on a Russ Canzler RBI single. Canzler was a perfect 4 for 4 with a walk in Game Two. He also scored twice.

The Smokies began to pull away in the sixth inning when they put three runs on the board on home runs by catcher Robinson Chirinos and second baseman Tony Thomas. Chirinos led off the inning with a solo home run to left field. Tonight, Chirinos was 3 for 5 with a double and the home run. He scored three times and had two total RBI.

Chirinos's blast was followed by a two-run shot by Thomas later in the inning. Thomas was 3 for 5 with three RBI and two runs scored.

After scoring two runs in the seventh to make the score 7-1, the Smokies finished the rout with a four-run eighth inning, punctuated by first baseman Matt Spencer's three-run blast. Spencer was 2 for 5 and scored twice.

Shortstop Marwin Gonzalez also had an RBI single in the two-run seventh inning. He was 2 for 4 tonight.

With the series tied at a game a piece, the two teams travel to West Tennessee for the only home game of the series for the Diamond Jaxx tomorrow night at 5:05 Central . If you live within driving distance of Jackson, TN, tickets to the game are free. Otherwise, tune into our friends at the Smokies Radio Network. And as always, check out their website for previews and great photographs, which they have generously allowed us to use.