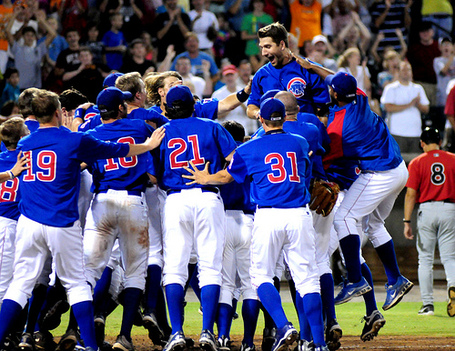 The Tennessee Smokies defeated the West Tennessee Diamond Jaxx, 5-2, winning their best-of-five series 3 games to 1. They will now face the Jacksonville Suns for the Southern League Championship.

Starter Craig Muschko was solid for six innings, allowing two runs on six hits, including one solo home run. Muschko didn't walk anyone and struck out four as he picked up the series-clinching win.

Kyle Smit and Luke Sommer closed out the game without allowing another run. Smit pitched 1.1 innings and gave up only one hit. Sommer entered the game in the eighth inning after Smit allowed the single and got a double play with one pitch. He was then perfect in the ninth as he closed out the game and got the save. Neither Smit nor Sommer walked or struck anyone out.

The big blow tonight was a two-run home run by catcher Steve Clevenger. Clevenger's shot came with the score tied in the fifth inning and gave the Smokies a lead they would never relinquish. Clevenger was 2 for 4. He also scored a final insurance run in the eighth inning.

Right fielder Brett Jackson hit three doubles tonight in a 3 for 5 game. He scored Tennessee's first run of the game in the third inning.

First baseman Matt Spencer was 3 for 4. He had an RBI single in the third inning and scored once on Clevenger's home run.