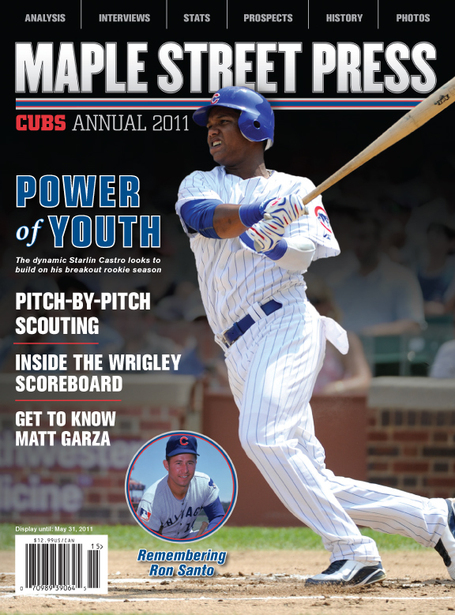 Here's something to get you excited about the upcoming season! The Maple Street Press Cubs Annual is ready for preorders, and will ship toward the end of this month (and be available in bookstores in the Chicago area, some other parts of the Midwest, and in some of the Phoenix metro area around March 1).

It's edited by me; I also contributed several articles as did some other BCBers whose names you'll recognize from this site and previous annuals.

You can preorder your copy at this link; after the jump, a list of all the articles in the annual.

Contenders Or Pretenders?
by Rob Glowacki

Rob G. from The Cub Reporter previews the 2011 Cubs.

The Ricketts Go Back To The Drawing Board
by Al Yellon

The Competition Rises
by Rob Glowacki

Good When It Counts
by R.J. Anderson

A profile of Matt Garza by R.J. Anderson, one of the writers from the SB Nation Rays site DRays Bay.

Now It's Time To Play Ball
by Paul Friedman

"The Voice of Wrigley Field" gives us a peek at how he does his job.

A profile of the Cubs' new pitching coach

Year One
by Miriam Romain

Ready To Lead
by George Castle

Mad Dog And The Professor
by Miriam Romain

A profile of Greg Maddux, what makes him tick, and how he is helping the team in his new role.

On The Edge
by Harry Pavlidis

A statistical look at Cubs closer Carlos Marmol; has there ever been a pitcher quite like him?

Myth Or Math
by Shawn Domagal-Goldman

A look at how the Wrigley winds affect pitchers and hitters.

The Ultimate Cub
by Al Yellon

A personal recollection and remembrance of Ron Santo.

Down But Not Out
by Josh Timmers

A profile of Cubs reliever Andrew Cashner (the title refers to the pitcher's love of dogs).

Oh! The Suspense!
by Al Yellon

A review of a little-known bit of Wrigley Field history: its suspended games.

Anatomy Of The Deal
by Dan Schlossberg

A look back on past Cubs trades and how more recent deals may wind up.

Full Board
by Al Yellon

A look inside the historic Wrigley Field scoreboard.

Analysis of whether it's good for a team to "go young" or try rebuilding on the fly with free agents.

BCB's cartoonist has two for us this year in the Annual.