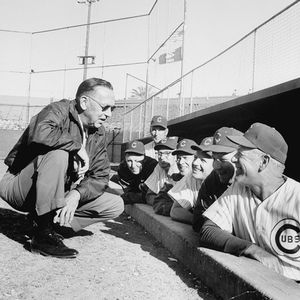 And now, presenting for the third time this baseball season, the amazing College of Pitchers! Hint: the College of Coaches was so bad the first two years, the Cubs ditched it before a third season. The current experiment is bound to a similar type of failure. Follow me past the jump for the grim details. First, the lineups.

Never mind what James Russell has done vs. the Rockies (a good hitting team). In his two starts, he has thrown 5.2 innings, allowed 14 hits, eight earned runs (12.71 ERA) and three home runs. Would you let a guy like that start another game? Me either.

Meanwhile, Jorge De La Rosa is off to a solid start, with a 3.00 ERA and three wins. He has made two career starts vs. the Cubs, one in 2009, one in 2010, both wins, with a 2.51 ERA and 16 strikeouts in 14.1 innings. Three current Cubs (Geovany Soto, Alfonso Soriano and Reed Johnson) have homered off him. But this isn't homer-friendly weather. Clearly, we are doomed.

Today's game is on WGN and ROOT Sports, the newly- (and not very well) named Denver sports channel. Here is the complete MLB.com Mediacenter for today.

Today's first pitch thread will be up at 7 p.m. CDT and the overflow threads will post at 8 pm, 9 pm and 9:45 pm CDT. If you need more overflows due to rain delays or extra innings, post them in the fanshot section.