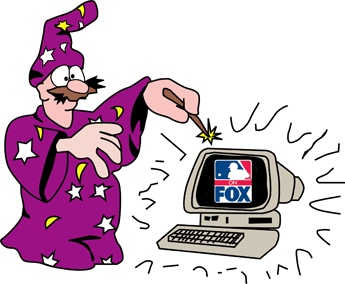 Exciting, right? This is the Cubs' first appearance of the 2011 season on the Fox Saturday regional telecast. Announcers will be Thom Brennaman and Tim McCarver (please have your mute button handy).

The way they've been playing lately, you might be happy to not be in one of the areas carrying the game, which you can find after the jump.

Now, let's talk home runs. The Cubs have hit 26 home runs in 31 games, which isn't a bad ratio so far, especially considering the awful weather here in Chicago in April. However, only nine of those home runs have been hit at Wrigley Field; Cubs opponents have hit 17 at Wrigley. Further, of the 26 home runs, 11 are by Alfonso Soriano, which means the entire rest of the team has hit only (approximately) one every two games.

With a team that has trouble hitting with RISP -- as we saw yesterday -- this lack of power has to turn around, or the troubles with run scoring are going to continue.

Well, many of us have said Castro needs a day off. Here it is.

Current Reds are hitting .333 (9-for-27) against Casey Coleman, who made one start and one relief appearance against them last year. Jay Bruce homered off him.

Bronson Arroyo has a long history with the Cubs since he arrived in the National League Central in 2006. Overall, he's 9-7 in 22 appearances (20 starts) covering 131.2 innings. The Cubs hitters who have been here the longest, Alfonso Soriano and Aramis Ramirez, are a combined 17-for-97 against Arroyo with two home runs. That isn't good. Overall, current Cubs are hitting .199 (39-for-196) against him. Clearly, we are doomed.

Please visit our SB Nation Reds site Red Reporter. Be careful over there, though.

Today's first pitch thread will be up at 12 p.m. CDT and the overflow threads will post at 1 pm, 2 pm and 2:45 pm CDT. If you need more overflows due to extra innings or rain delays, post them in the fanshot section.