KANSAS CITY -- Jeff Samardzija drives me nuts. I think it's fair to say that he likely drives all of you nuts, too.

Sometimes, he throws 98 MPH and flings baseballs past hitters. Other times he still throws almost that hard, but cannot find the strike zone. That's what happened tonight, when he was brought into a tie game in the eighth inning after John Grabow retired the first batter of the inning on a lazy fly to right field.

Yes, that's right -- once again, Mike Quade decided that a lefthanded pitcher could not possibly throw to the righthanded Jeff Francoeur. Granted, Grabow has been pretty bad against RHB this year. But Samardzija often cannot find the strike zone. He walked Francoeur. This is nearly impossible to do: Francoeur had walked only 17 times in 317 plate appearances this season. Then he walked Mike Moustakas. Even after that, he struck out Wilson Betemit, although during that at-bat is where the Cubs actually lost the game. Geovany Soto couldn't handle one of the Shark's outside tosses and the ball got away from him for a passed ball. Thus, when Chris Getz hit a ball that glanced off Samardzija's hand, and Starlin Castro couldn't quite get it quickly enough to throw Getz out, a run scored instead of the bases being loaded.

So the Royals scored what turned out to be the winning run, when Joakim Soria struck out the side in the ninth for his 12th save, without a ball leaving the infield.

This event was typical of Saturday night's game, which, for the first few innings, didn't appear as if either team wanted to win, much less score. The Royals took a 2-0 lead when Carlos Zambrano gave up four hits sandwiched around a walk; the Cubs tied it up on back-to-back jacks (it happens so rarely, you'll forgive me for using that terminology) by Aramis Ramirez (a 33rd birthday present to himself) and Soto. Big Z struggled a bit, but still wound up with a "quality start" -- that stat is getting devalued by Cubs starters every night, it seems -- by allowing just the two runs in seven innings.

It still didn't seem as if either team wanted this game and we'd be headed to extra innings until Samardzija's walkathon.

About Reed Johnson getting thrown out at the plate in the third inning -- I'd have sent him, too, with only one out and a chance to take the lead. It took a perfect throw from Alex Gordon in left field and a perfect tag from catcher Matt Treanor, and they got those. Otherwise, the Cubs did not really threaten at all, except for the home runs, hitting into a pair of double plays. It was KC starter Danny Duffy's sixth major league start, and by far his best.

What's wrong with this picture? KC's Melky Cabrera pinch-hit in the eighth and wound up called out on strikes. Cabrera has started all but three of the Royals' games so far this year and has batted either first or second all year. He has 43 RBI. That's not even first on the Royals -- but it would lead the Cubs. By four.

While you are ruminating over that, the rest of my day was a quintessential Kansas City experience. I waited in line at Arthur Bryant's Barbecue near the historic Jazz District in KC; I know others here have recommended other BBQ places here, but the food was excellent and there was so much of it, that I didn't have to have any dinner at the K. Another reason for going to Bryant's original location was that it was only a few blocks from my next destination, the Negro Leagues Baseball Museum.

This is a must-see if you are in Kansas City and in fact, is worth the trip just for its own sake. It's full of stories and memorabilia from the Negro Leagues era in the United States; it doesn't hold back telling the story of how black players were systematically barred from playing major league baseball, but also celebrates its history and how black players finally broke the color line, beginning with Jackie Robinson. The last stop is a display of all the Negro Leaguers who are in baseball's Hall of Fame in Cooperstown. A number of years ago, 17 Negro Leaguers were all inducted at once, but Buck O'Neil, who perhaps did more than almost anyone to promote this, and for young black players (particularly those he helped the Cubs sign, like Ernie Banks, Billy Williams, George Altman and Lou Brock), was snubbed for induction.

O'Neil gave the speech at that Hall ceremony, since all the other inductees at that time were deceased. For him, he said, that was better than induction. Not that the other 17 didn't deserve induction -- they did -- but O'Neil certainly did, too. There is a large display honoring O'Neil and his career at the very end of the exhibition, a fitting tribute to one of the best baseball men who ever lived. The existence of this museum is largely because of his efforts. Go see it someday.

One baseball-related thing worth seeing that many overlook in Kansas City -- located just a few blocks from Bryant's and the museum -- is the site of Municipal Stadium, the original home of the Kansas City Athletics from 1955-67 and home of the Royals from 1969-72, as well as where minor league and Negro League ball was played since the 1920s, and home of the Kansas City Chiefs (from 1963-71, and the longest game in NFL history, the 1971 playoff game with the Dolphins, was played there, the last NFL game played in the stadium). It's an empty lot now surrounded by some small new homes, but there is a plaque commemorating the six decades of pro baseball that was played on that location. 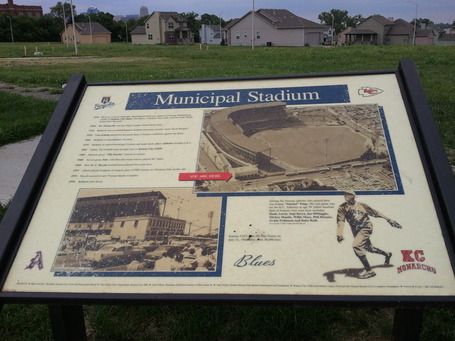 A couple of final notes about the stadium and the crowd: I visited the Royals' Hall of Fame, which is quite well done, highlighting their history (although, there's not much there past the late 1980s). I hope the Cubs eventually are able to have a similar place whenever they get around to renovations. Meanwhile, 38,744 was the announced total at the K Saturday night, a little short of the Royals' biggest of the year (though announced as a sellout). Thanks to BCBer dtpollitt, I was able to navigate to a parking lot where I was out and back to the hotel in 15 minutes -- far better than Friday night. Now, I just have to figure out how to get back in to that lot for Sunday's game.

Where maybe the Cubs will win a series. Or not. It's been entertaining, if not very good baseball.