Today's game is yet another regionalized game from the wizards at Fox-TV; check after the jump for the game in your area. Given the way the Cubs have played this year, you may be happier if you are not in an area carrying this game.

Honestly, that's about all I've got today. Well, except this. The Cubs have held several sessions at Wrigley Field for season ticket holders; this is what today's looked like: 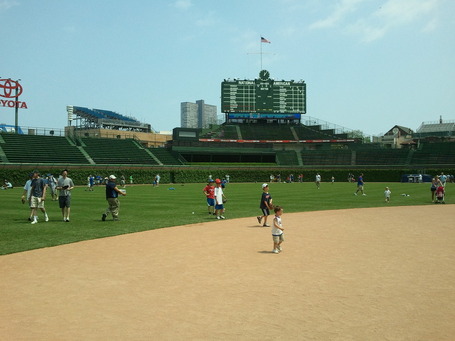 If you're interested in what went on at this event, here's the flyer they passed out at the event (link opens .pdf). Yes, I saw Tom Ricketts and other members of management. No, it wasn't the right venue to discuss more substantive issues. This was a fun day for STH and their friends and families. The team did give free hot dogs, soft drinks and water and on the way out, everyone got a Ron Santo commemorative book.

There was one person who was walking around with a bag over her head, though.

Randy Wells had two of his better starts of 2010 against the Cardinals -- and then another one where he gave up five runs without getting anyone out. Overall, he wound up with a 3.60 ERA in three starts against them, which isn't bad. Hold them to three runs today and the Cubs might have a shot at winning. No current Cardinal has homered off Wells and even Albert Pujols has been held to 1-for-8.

Kyle Lohse was once in the Cubs farm system. He was traded to the Twins in 1999 as a throw-in in the Rick Aguilera deal; the prospect the Twins really wanted was a pitcher named Jason Ryan, who pitched in 24 major league games and has been out of baseball since 2000. Meanwhile, Lohse has had an 11-year career and even the other pitcher the Cubs got with Aguilera -- Scott Downs -- has been productive as a reliever, with other teams. All the Cubs got out of the deal was the mediocre tail end of Aguilera's career. Oh, and a year or so from Rondell White, who the Cubs acquired from the Expos for Downs.

Lohse has had a very good start to this season, though he did not face the Cubs in the series at Wrigley last month. Aramis Ramirez is hitting .467 (7-for-15, one HR) off Lohse.

Today's game is on Fox. Essentially, it's on everywhere east of Denver, except in the Cincinnati Reds home area. For a complete coverage map, click here. And, here is the complete MLB.com Mediacenter for today.

Today's first pitch thread will be up at 3 p.m. CDT and the overflow threads will post at 4 pm, 5 pm and 5:45 pm CDT. If you need more overflows due to extra innings or rain delays, post them in the fanshot section.