Since Josh did one of these -- chose a specific game rather than use the random number generator to choose a random date in Cubs history -- I figure I should get a chance to do one of these as well.

The Cubs and Mets were chosen to open the 2000 season in Japan. Part of the reason the Cubs were chosen was the then-popularity of Sammy Sosa there; I saw his image on everything from cellphone lanyards to billboards to the sides of various food items in 7-11 stores (yes, they have them over there, too).

The Cubs were coming off a really bad 1999 season in which they had gone 6-24 in August (and 19-42 from Aug. 1 to the end of the season), one of the worst calendar months in team history. Meanwhile, the Mets had won the NL Wild Card in 1999 and were optimistic that they'd go farther in 2000 (they did, winning the NL pennant).

TOKYO -- After a pair of exhibition games against the Tokyo Yomiuri Giants (losing 6-0) and the Seibu Lions (winning 6-5), it was finally time Wednesday night for the real season opener in the sold-out Tokyo Dome for the Cubs and Mets to open the 2000 MLB season, the first time MLB teams have played a regular season game in Japan. The sellout crowd included the Japanese royal family; I heard it was the first time any of them had ever attended a professional baseball game.

Maybe this year will turn out better than last year after all. Behind the solid pitching of Jon Lieber, who threw seven strong innings, the Cubs beat the Mets 5-3 and so, at least for a day, are in first place by themselves in the NL Central.

The hitting hero of the day was Shane Andrews, who hit the first home run by a North American player in a MLB game in Japan off the Mets' Dennis Cook in the seventh inning, extending the Cubs' 2-1 lead to 4-1. Andrews had two hits and three RBI; Mark Grace also homered to give the Cubs their final run in the eighth inning, and Joe Girardi chipped in with three hits in a 12-hit offensive attack.

Maybe Andrews can be that power-hitting third baseman the Cubs have sought since Ron Santo departed the scene. He's only 28 and he did hit 25 homers for the Expos just two years ago.

My only complaint is that the Cubs could have had even more runs; they drew 10 walks off Mets pitching and left 13 men on base. Let's hope this isn't a chronic problem all year long.

Did you wake up at 4 a.m. to see this game on Fox Sports Net? If you did, it must have ended just about the time morning rush hour was starting to get heavy in Chicago. The 15-hour time difference between Chicago and Tokyo is weird enough, but what's even stranger is that if this game -- which ran to three hours and 26 minutes -- had gone much longer, I'd have had an expensive taxi ride back to my hotel, because the Tokyo subways stop running at 11:30 p.m. As it was, the famous "pushers" -- uniformed personnel wearing white gloves -- shove as many people as they can into the subway cars, almost until you can't breathe. I was surprised when I turned around -- with difficulty -- after I got "pushed", to find out I was standing next to about the only other Americans on the car, a family from upstate New York.

The Tokyo Dome (they call it "The Big Egg" because of its white roof) is similar in shape and seating to the Metrodome in Minneapolis. No one really knows what the exact seating capacity is; sellout crowds are announced as 55,000, and that's what this game's crowd was announced as. Today, the Mets were the designated "home" team; tomorrow, the Cubs will be "home", and presuming they'll announce the same attendance (since they always do) and since Wrigley doesn't hold nearly that many, the Cubs will set a home attendance "record" will always stand.

Usually, there are Japanese fans with noisemakers and musical instruments in the stands. Apparently, they were told -- no one seems to want to take credit or blame for this, although rumor has it MLB was behind the decision -- to leave those at home for this series. Thus, since neither the Mets nor Cubs have a native rooting interest, the fans were unusually quiet for this game; the only real loud cheers for either team came from the area where I was sitting. I had bought my tickets (which cost ¥10,000; equivalent US price, about $90) through a travel agency in New York, so there were quite a few Mets fans around, a couple of whom ... well, let's just say they didn't give New York a very good name.

And, here's another photo from the game, just as it was ending; that looks like manager Don Baylor congratulating Jon Lieber on the video board. Who knows? Maybe this game is a good omen for the rest of the season. 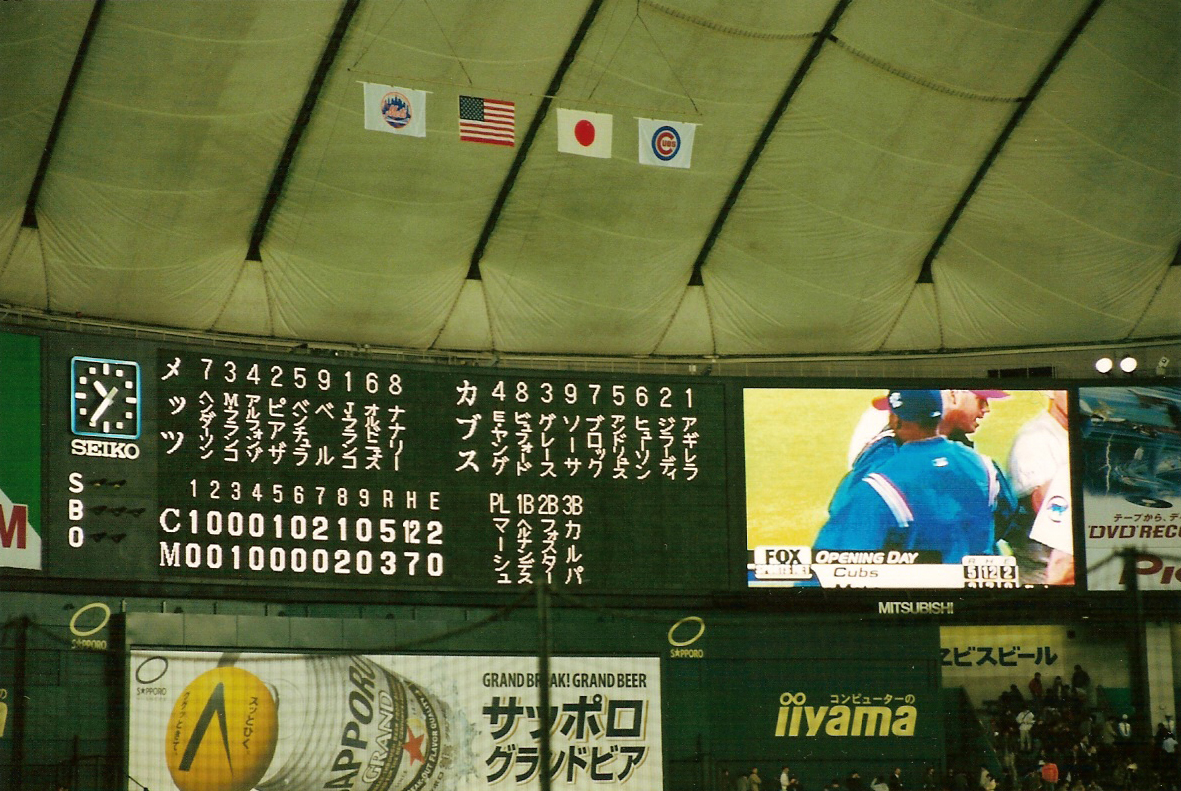 Click on photo to open a larger version in a new browser window; photo by Al Yellon

The second and final game of the series starts Thursday... night, in Japan, and at 4 a.m. Thursday Chicago time. Kyle Farnsworth gets the start against Rick Reed.