The 1940 Cubs posted the first losing season for the franchise in more than a decade.

Share All sharing options for: A Game From Cubs History: June 9, 1940

The 1940 Cubs were a harbinger of the future. Charlie Root and Gabby Hartnett had reached the end of their playing careers -- though Hartnett still managed the team -- and no suitable replacements had been found. The club floundered around the .500 mark most of the year, never in contention, and when they lost the last four games of the season became the first Cubs team since 1925 to finish with a losing record.

Still, when they swept a doubleheader from the Boston Bees -- the name the Braves gave themselves for a few years in the late 1930s and early 1940s -- on June 9, there was some hope; those wins gave the Cubs a seven-game winning streak and put them within 6½ games of first place. Irving Vaughn of the Tribune picks up the story:

Starting in 1940, the design of Cubs scorecards got quite a bit more elaborate. Blue Valley Butter no longer had a featured spot on the cover; instead, artistic designs by Otis Shepard were the norm, stretching all the way into the 1970s. Here's the complete cover image (click on it to open a larger version in a new browser window or tab): 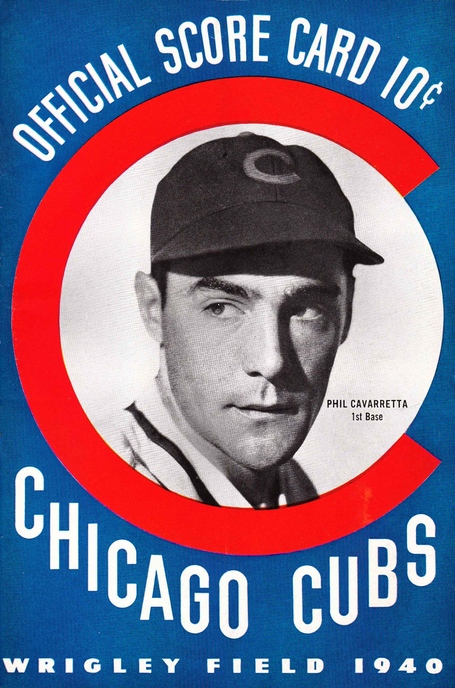