The Cubs split a doubleheader this day in Cincinnati, in unusual fashion.

Share All sharing options for: A Game From Cubs History: August 9, 1942

I've chosen another doubleheader for this post, this one played in Cincinnati. It was a fairly ordinary twin bill, in a fairly ordinary season -- the Cubs finished 68-86, their worst mark in 17 years. They won the first game 10-8 in 18 innings, then lost the nightcap 2-1, and therein lies the tale, as reported by Edward Burns in the Tribune:

Now what do you notice in that paragraph that's unusual? First, there's the archaic usage of "o'clock" -- we wouldn't write "8:41 o'clock" today. Incidentally, 8:41 was precisely the time of clock sunset in Cincinnati on August 9, 1942.

This is a little-remembered part of baseball history from that era. The very first night game in major-league history was played in Cincinnati May 24, 1935 -- more than seven years before this date. In those days, though, night games were still comparatively rare:

More important, though, was the fact that teams in general did not turn on lights to finish games that had been started during daylight hours. There was no specific rule mandating this, it was simply customary in the early days of night baseball. Thus you had the scenario, played out here, of a game being called for darkness in a stadium where they had lights.

Here's the full 1942 Wrigley scorecard; click on it to open a larger version in a new browser window or tab. 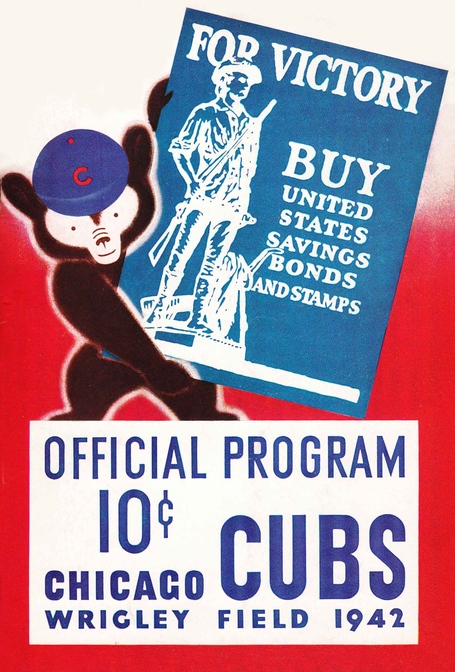