The Cubs had a first in franchise history on this summer Friday.

Share All sharing options for: A Game From Cubs History: June 25, 1943

If anyone ever asks you when the first night game was played at Wrigley Field, you could truthfully answer "June 25, 1943". That's because the Cubs experimented -- at a time when games usually lasted two hours or less, and it's light in Chicago until after 8:30 p.m. -- with playing a "twilight" game. The game began at 6 p.m. -- and by the current definition of "night game", that qualifies. The Cubs had hoped to draw more people in a war year when many were working longer hours.

The concept was good, and so was the Cubs' execution that evening, a 6-0 shutout of the first-place Cardinals. The two hour, 17 minute game ended before the sun set (8:30 p.m. on June 25, 1943). Edward Burns of the Tribune has the story:

Hi Bithorn last twilight dazzled the world champion St. Louis Cardinals with a two-hit job of pitching and as a recreational sideline personally equaled the Cards' hit total with a double and a single, scoring a run after the double and driving one in with the single. The net of all this sparkling Puerto Rican conduct was a 6 to 0 victory, Hiram's fourth conquest of the champions this season and it was witnessed by a ladies day crowd of 10,070, of which 6,620 were paid.

Bithorn has one distinction in major-league history: he was the first Puerto Rican native to play in MLB. He had a fine year in 1943, going 18-12 with a 2.60 ERA, 1.17 WHIP and leading the National League with seven shutouts on a team that went 74-79 and finished 30½ games out of first place. He got some MVP consideration (finished 32nd), and had there been a Cy Young Award then, he would probably have finished high in the voting. But he missed 1944 and 1945 in military service, and when he returned in 1946, at age 30, wasn't nearly as dominant. He returned to his native Puerto Rico, and, according to his baseball-reference page:

Bithorn died in 1951, at age 35, when he was shot and killed by a policeman in Mexico. The policeman shot Bithorn in the stomach after a misunderstanding over the selling of a car. After being shot, he was taken to the nearest hospital - which was 84 miles away.

Meanwhile, after that "twilight" win over the Cardinals, Edward Burns wrote:

Because of the easy grace with which Jim Wilson's lads knocked off the league leaders in the gloaming, the triumph formally was presented as the opening for the Chicagoans' drive for the National league pennant. If the Cubs win today's single game and tomorrow's double header, they will be only 11 games behind the champs and won't have to wait long to get at the Brooklyn Dodgers, whom they beat three out of five the last series.

Wow, that's even more optimistic than I usually am. Three wins in a row and they'd be "only" 11 games out? Why, that's practically contending! The 1943 Cubs did have a pretty good July, going 20-9, but never got over .500, peaking at two games under, and the Cardinals ran away with the pennant with a 105-49 record, 18 games ahead of the second-place Reds. (Note, also, the use of "gloaming", fresh in the minds of most Cubs fans after the Hartnett walkoff just five years earlier.)

And the Cubs never had another "twilight" game, and never again scheduled a home game that late in the day until the first attempt at a night game, August 8, 1988, the one that was rained out.

Here's the 1943 scorecard; click on it to open a larger version in a new browser window or tab. 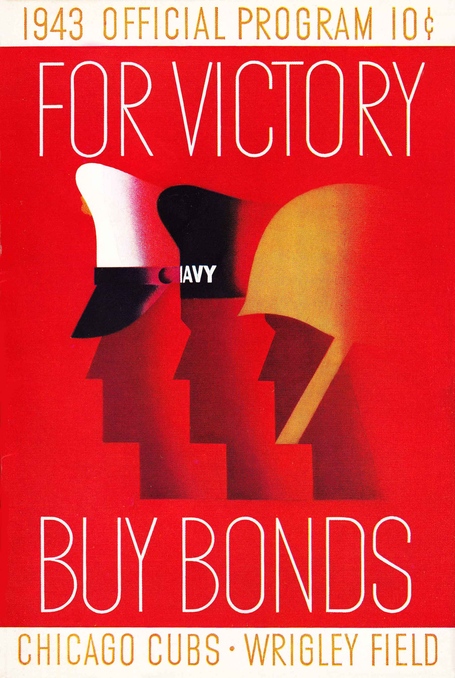