The Cubs got off to a horrid start in 1944, but then made a move that could have helped them win the pennant the next year.

Share All sharing options for: A Game From Cubs History: April 30, 1944

The Cubs hit rock-bottom early in 1944. Just six years after they won the NL pennant, a doubleheader loss to the Cardinals April 30, 5-0 in the first game and 7-5 in the second game, left them with a 1-9 record, 7½ games out of first place just 10 games into the season.

There's only one thing to do after that, right? No, not fire the hitting coach -- they didn't have specialized hitting coaches in 1944. So that leaves "fire the manager", but it wasn't exactly a firing of Jimmie Wilson, as Irving Vaughn of the Tribune explains:

"Resignation" is likely in quotes for a reason. Rather than make Wilson suffer the pain of a firing, they allowed him to resign.

Weather helped play a role in what happened next. In those days, games were often postponed for cold weather even if it wasn't raining; the thought being that a doubleheader would draw more than twice as many fans as two games played in bitter conditions. This practice went on well into the 1960s. From April 30 through May 7, the Cubs played just one game -- a 10-4 loss to the Reds at Wrigley Field, their 10th consecutive defeat. Oddly, it was with former Cubs manager Wilson in the other dugout -- he had signed on almost immediately as a Reds coach.

By May 7, the decision had been made; Grimm would be hired away from Milwaukee to join the Cubs. The team issued a statement:

Stengel might have been popular at the time, but he hadn't had much success as Dodgers or Braves manager; he had left the Braves after the 1943 season, so was available and looking for work. It's still odd to think, from a 2012 standpoint, of a major-league team looking for another team's replacement manager. Top minor-league clubs like the Milwaukee team was in 1944 were far more independent than they are now, even while the farm system structure we now know was being built; they were under no obligation to let Grimm go, but did so when, as noted, a suitable replacement was located.

The Cubs lost the first three games Grimm managed in his second stint as manager, extending their losing streak to 13. That would remain the club record until the 14-game losing streak to begin the 1997 season. But after that, either from talent or Grimm's management or both, the team started to play better. They went 20-12 in July and had a good September, too, though no one was to catch the 105-49 Cardinals, who won the pennant by 14½ games. But after that 1-13 start, the Cubs went 74-66, perhaps a harbinger of the pennant year to come in 1945.

Here's the full 1944 scorecard image; click on it to open a larger version in a new browser window or tab. 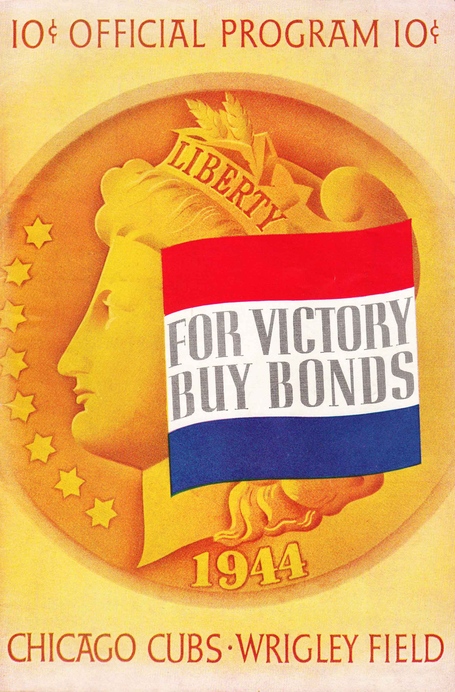