Yes. It's the game in which the Cubs last clinched a National League pennant -- and it had a thrilling ending.

Share All sharing options for: A Game From Cubs History: September 29, 1945

It's a sad fact of Cubs history that in all of team history, they have never won a World Series at home -- both 1907 and 1908 were won in Detroit -- and they have clinched postseason berths at Wrigley Field just three times (the 1998 wild-card tiebreaker, and the 2003 and 2008 NL Central titles).

Thus was the case in 1945, when the Cubs were in a tight race with the Cardinals. They had started slowly, but roared into first place with an 11-game winning streak to start the month of July. (Among those wins was a 24-2 crushing of the Braves, still the second-highest run total in any single game by a Cubs team since 1900.) They never left the top spot after that, although the lead dwindled to 1½ games after a loss to the Cardinals on September 26, with five games remaining.

A doubleheader sweep in Cincinnati September 27 put the Cubs on the cusp of clinching (they took 21 of 22 from the Reds that year, which tied a record for a 154-game season), and they traveled to Pittsburgh to finish the season.

They won the first game of a doubleheader 4-3 to clinch the pennant (a three-game lead with two games remaining); and it was done in exciting fashion. They scored the lead run on a sacrifice fly in the top of the ninth, and then it was up to Hank Borowy, who had come over midseason from the Yankees and pitched lights-out, much as Rick Sutcliffe would do in a similar deal with the Indians 39 years later.

But Borowy faltered; the Tribune's Edward Burns picks up the story:

The "milkman" mention appears to refer to Erickson's offseason job -- those of us of "a certain age" remember when milk was still delivered to your home... in glass bottles, no less. Anyway, another Tribune article quoted some of the players (and manager Charlie Grimm) involved in that last play:

There are a couple of interesting things in that series of quotes. A balk to pick up your hat? So did that mean Erickson had to throw the final pitch cap-less? Or were they referring to losing the cap during the pitch?

And, I'm not sure what "uppers and lowers" refers to. Dentures? Maybe.

In any case, the Cubs won the second game of the doubleheader too, 5-0, and finished the regular season the next day by beating the Pirates again to end on a hot note, with a five-game winning streak. The World Series... not so much, as we all know. Due to wartime travel restrictions, the Series was played in an unusual pattern -- the first three games in Detroit, the last four in Chicago. The Cubs got blown out in Game 7 after Grimm started Borowy on two days' rest and he got pounded. Hank Wyse, who had thrown just one relief inning in the previous week and who had also had a fine year in 1945, insisted to his dying day that the Cubs would have won the Series if Grimm had started him instead.

Such, as usual, is Cubs history.

Here's the full image of the 1945 scorecard -- click on it to open a larger version in a new browser window or tab. 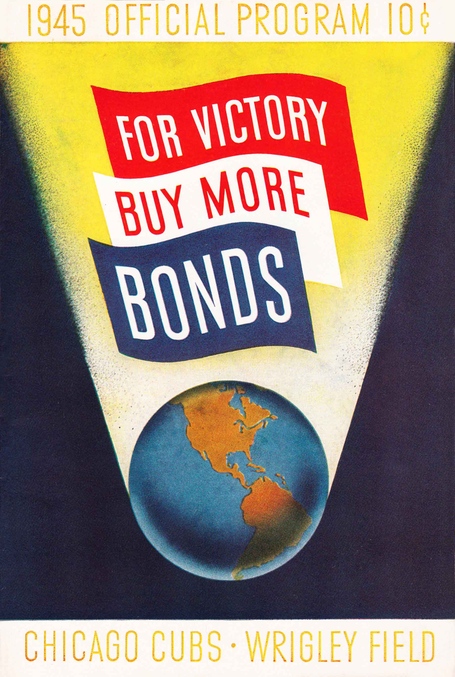