The Cubs opened the defense of their 1945 N.L. title with a new observer on the scene at Wrigley Field.

Share All sharing options for: A Game From Cubs History: April 20, 1946

The defending National League champion Cubs swept their opening series in Cincinnati in 1946, and came home with a 3-0 record, excited to raise the pennant flag (which is currently displayed in Wrigley Field's United Club; I think it should be given a more prominent place where more could see it) and take on the hated Cardinals. 40,887 showed up at Wrigley Field and saw the Cubs promptly flop, as Irving Vaughn wrote in the Tribune:

... the mere sight of the St. Louis Cardinals caused the Cubs to overlook the importance of runs. Not a little of this forgetfulness can be attributed to Harry Brecheen, who southpawed so elegantly in the arctic breeze that he shaded Chicago's Hank Borowy by whitewash margin of 2 to 0.

There was one other important thing that was scheduled to happen that cold afternoon at Wrigley:

Television history will be made in Chicago today at 1:25 p.m. when station WBKB takes its mobile camera pickup unit to cover the opening game in Wrigley field between the Cubs and St. Louis Cardinals. A pre-game pickup at 1 p.m. will be made from the studios at 190 N. State st. Then the camera will pick up the entire nine innings, with Jack Gibney commenting. William C. Eddy, director of the station, said that other important games will be televised this season.

That's the very studio where I worked for many years. Unfortunately, only the people who worked at the station saw the game, as reported by the Tribune:

Station WBKB's effort to televise the Chicago Cubs game with the Cardinals yesterday failed. The station's mobile unit televised the game successfully at the field, but electrical interference in the State-Lake building where the transmitter is located resulted in such poor images that William C. Eddy, director, declined to put them on the air.

This was the first attempt to televise a baseball game in Chicago. Eddy said that tests conducted Friday evening from the mobile unit produced good images. Yesterday some adjustments were made in the antenna and then came trouble. Eddy blamed the interference on elevator operations in the building where the studios and the transmitter are located. He said that another try to make a remote pickup would be made soon, probably next Saturday.

Whether that happened or not is not known; they must have made several attempts, because no successful telecast was made until July 13, when a 4-3 loss to the Dodgers was successfully televised, according to the Tribune's Larry Wolters:

Telecasting Chicago baseball for the first time yesterday, WBKB brought video fans the entire Cubs and Dodgers game, relayed through its mobile unit at Wrigley field. Televiewers saw the game from an upper tier position looking across home plate down the first base line, with the pitcher in view on the mound. Excepting when the camera was swung to follow action, they missed the activity at second, third and most of the outfield.

Remember, there were no zoom lenses in 1946, and just one camera. Still, there was some entertainment value:

The lookers got good views of players leading off from first, of Leo Durocher rushing out to argue with an umpire [they looked like black bears], of the dust raised when a runner slid home. Fans got a clear view of the double play, with action from short to second to first, retiring the Cubs in the sixth inning.

Leo Durocher, then Dodgers manager. No Cubs fan in 1946 would likely ever have dreamed that Durocher would take over the Cubs 20 years later. And wouldn't it be nice if some announcers today did this?

Jack Gibney, the commentator, judiciously let the pictures speak for themselves. His comment was limited largely to describing action out of range of the camera, to statistics, recapitulations, and crowd color and reaction.

Wolters didn't seem optimistic about the future of televising baseball:

Because of the considerable area of action in baseball, this sport is much less satisfactory for televising at present than wrestling or boxing. Eddy was sufficiently satisfied, however, with the result yesterday to continue. WBKB will televise the Cubs-Giants game tomorrow.

It would be two more years before WGN-TV would go on the air and begin its still-uninterrupted run of carrying Cubs games. It would be more years than that before the Cubs would contend for a pennant again; they finished 82-71 in 1946, a decent record, but a distant third, 14½ games behind the pennant-winning Cardinals. Little did Cubs fans know that it would be many years before they'd even finish above .500 again.

Here's the full image of the 1946 Cubs scorecard; click on it to open a larger version in a new browser window or tab. 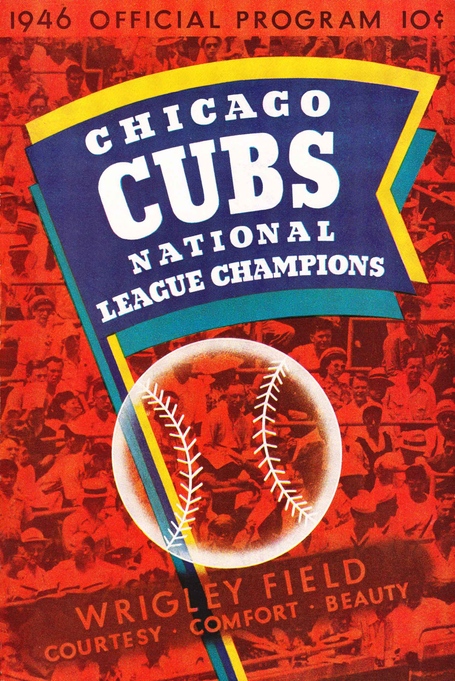