Sound familiar? A hot start, then a June collapse -- the story of many Cubs seasons.

Share All sharing options for: A Game From Cubs History: June 14, 1947

Things finally fell apart post-war for the Cubs in 1947. They went back to a sub-.500 team -- they wouldn't have a winning record for 16 more seasons -- and really didn't have any good players apart from Andy Pafko and Bill Nicholson. The pitching staff was a disaster, although three other teams were worse.

But 1947 didn't start out poorly. In fact, the Cubs roared into first place on a 14-7 start, and stayed near the top until June. When they won their fifth in a row June 14 at Wrigley Field over the Phillies, they moved back into the top spot, as Edward Burns reported in the Tribune:

Interesting use of language, in addition to capitalization. That was Tribune style, as you have likely noticed through this series; "field" wasn't capitalized after "Wrigley", nor was "league" after "National". At the same time, things like "Pinch Batter" got the capital-letter treatment, and Grimm's name was spelled "Charley" at times, "Charlie" at others.

That next day? Despite the fact that Schmitz was probably the Cubs' best pitcher, and Rowe -- once a Tigers ace, in the 1930s -- was nearing the end of his career at age 37, the Cubs lost that June 15 game 6-1, the first loss of what wound up being an 8-24 streak. The Cubs wound up 69-85, a dismal sixth-place finish in the eight-team N.L.

Here's the full 1947 scorecard; click on it to open a larger version in a new browser window. 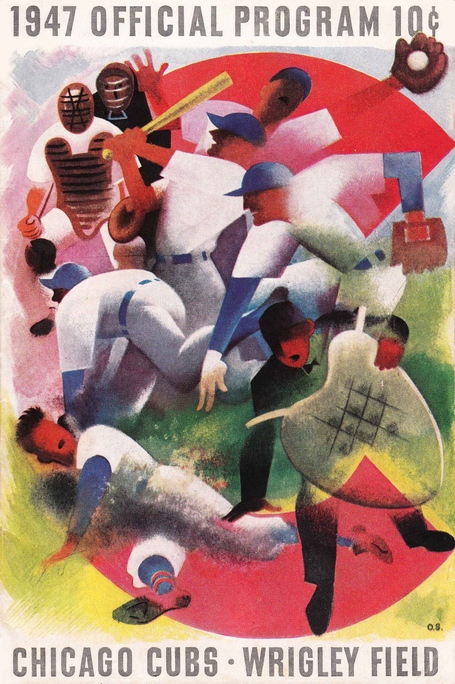