The Cubs lost on this date, but something far more important than the game, for the Cubs' future, happened at Wrigley Field.

Share All sharing options for: A Game From Cubs History: April 23, 1948

The 1948 Cubs were, at the time, the worst team in franchise history. For the first time in the team's then 73-season history, a Cubs club lost 90 games. (It wouldn't take them long to repeat that; the Cubs lost 90+ games eight more times before their next winning season.) They were over .500 just once -- at 4-3 -- and again, Andy Pafko and Bill Nicholson were their only good players, probably the only reason they didn't lose 100 games.

The game of April 23, the first home game of the 1948 season, wasn't anything to remember baseball-wise if you were a Cubs fan; the Cubs had nine hits and a walk but could not score in a 1-0 loss to the Cardinals.

What is more significant about that date is that April 23, 1948 was the first regular-season game televised by WGN-TV, beginning an uninterrupted relationship that will enter its 66th season in 2013.

WGN-TV, as a Tribune-owned property, of course got considerable coverage in the newspaper. The station carried both Cubs and White Sox home games -- all 154 games played in the city in 1948 (including 21 White Sox night games) -- and the paper was especially excited about one TV innovation:

Cub and Sox fans will see video baseball at its best thanks to new telecasting techniques and the Zoomar lens, latest development in television eyes.

The Zoomar -- so called because it "zooms" quickly into focus for long shots or closeups -- enables the television camera man to swing quickly from views of the entire diamond to closeups of batting, pitching or bullpen action.

Effectiveness of the lens, which costs $7,500, was appreciated by newsreel audiences who received unprecedented pictures of the World series and football last fall.

No mention of fielding ("bullpen action"?); also, $7,500 in 1948 was a tremendous amount of money, equal to approximately $72,000 in 2012 dollars. Here's how the Tribune described the station's new baseball announcer:

Jack Brickhouse, newly appointed sports service manager and sports broadcaster for W-G-N, Inc., embarked on his radio career as the result of an announcing contest held in 1934 by WMBD, Peoria, Ill. His reward was a $17 a week position as announcer and switchboard operator.

After 20,000 broadcasts and six years with WMBD, including extensive sports assignments, Jack joined W-G-N and Mutual as staff, special features, and sports announcer. Leaving W-G-N to join the Marines, he returned to radio after his discharge and did sports announcing in Chicago and New York on a freelance basis.

If you have ever heard the TV call of Willie Mays' famous catch in the 1954 World Series, that's Brickhouse; he did quite a number of national telecasts in TV's early years.

Some worried that TV would hurt attendance and did not carry games (the Dodgers, for one, televised almost no home games into the 1980s); we know now that WGN's carriage of every afternoon home game helped make several generations of Cubs fans, in Chicago in the early years and elsewhere after WGN became a national cable channel. In 1948, the Tribune quoted Cubs owner P.K. Wrigley, who turned out to be prescient:

We are confident that television, handled with imagination and understanding, will bring baseball closer to vast numbers of Americans. It will result eventually in bringing many more persons to ball parks to get a close-up, personal view of the dramatic scenes and colorful characters they become acquainted with on the television screens.

The Cubs drew over 1.2 million in 1948, despite the awful team, and continued to annually draw over a million fans -- a lot for that era -- until the mid-1950s, when the team's poor performance finally had an impact on attendance.

But eventually, the kids who watched the Cubs on TV after school in the 1940s, 1950s and 1960s, would become a huge part of the fanbase today.

The scorecard below was another milestone in 1948. Before that year, the scorecard was in a small format, maybe 5x8. The '48 card -- and all since -- have been in a size close to, or equal to, a standard 8x11 piece of paper. Click on the image below to open a larger version in a new browser window. 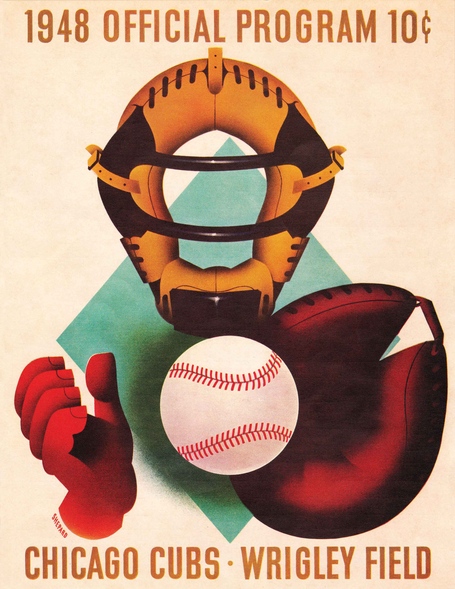